When ACL Fest revealed its 2014 lineup Tuesday, the collective social media grumble was the dearth of guitar gods in the mid and lower tiers. While Pearl Jam claims a headline spot for the second time in five years and Minneapolis indie OGs the Replacements cling toward the top of the bill, there’s still an undeniable influx of digital artists.

There was the usual bands-that-don’t-play-instruments gripe. And who-the-hell-is-Lorde? indignation. Generally, there was a nostalgia amongst dissenters for guitars rather than the soundboards of dance lords. Zilker’s Vegas Strip The top of the lineup is dotted with mega-watt stars Calvin Harris, Icona Pop, and hip-hop reunion Outkast. This quadrant will be flashy, endlessly catchy, and a nonstop dance party of songs that have almost become parodies of themselves. Still, I’ll go with Icona Pop on this one: “I DON’T CARE! I LOVE IT!”

High-Octane House Jams Danish electro-pop artist MØ is the heiress to the throne of glossy production darling Grimes. She’s got some quirks to her dance jams, as do brothers-in-arms Major Lazer and Chromeo. Trombone Shorty is similarly slick, but he achieves the aesthetic with New Orleans horns.

Radio Bobbleheads Now Eminem could go either way. In his almost two-decade run, he’s pumped up the jam from time to time, but prefers the moodier side of things. The only kind of dancing you could possibly do to Nancy Sinatra wannabe Lana Del Rey is the quixotic slow turn she did on her infamous Saturday Night Live performance. Suffice to say, Lana, like Pearl Jam, keeps an “Even Flow.”

Future Year-End Listers St. Vincent’s certainly got upbeat songs on February’s eponymous release, but her stage show arrives so heavily choreographed you won’t be able to focus on your own moves. Slacker Mac DeMarco and Real Estate cap this quadrant with new easy-listening oeuvres. 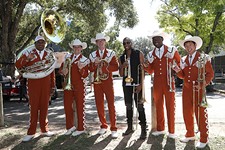 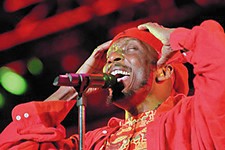