The Lovesong of Dawn & Hawkes

Fresh off ‘The Voice’ with a shot at ‘Forever Happily’ 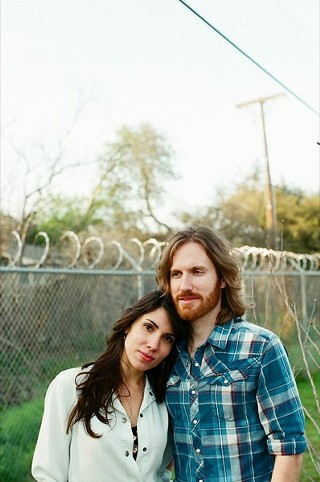 Thursday, Austin indie folk duo Dawn & Hawkes, fresh from winning over fans on The Voice with a rendition of the Beatles’ “I’ve Just Seen a Face,” appear at Lamberts. Ali Holder opens. The show folds into all the local performances that benefit SXSW Cares.

The television exposure sent the twosome’s latest album, Golden Heart, onto the charts. Voice coach Adam Levine fell head over heels for them, while the larger audience caved for their interplay, romance, and music. They won everyone over by being raw, real, and original.

I first saw Dawn & Hawkes play the Cactus Cafe for a Stax vs. Motown show last December, which we both took part in. They stood out and rocked it hard in that late-Sixties way, acoustically. I became an instant fan.

Austin Chronicle: Let’s get straight to your appearance on The Voice.

Chris Hawkes: It was a great platform for exposing our music. I think that when we went into it, we had a certain level of confidence because we had seen other Austin artists we really respect go on there and do a great job of holding onto their integrity.

Miranda Dawn: Yes, locals like Nakia, Suzanna Choffel, Jonny Gray, and Brian Pounds have also gone to Los Angeles to do it.

AC: What was your goal for the show?

CH: We went into it with a certain amount of, “Let’s make the most of this opportunity and be true to ourselves the whole time.” You assume that people watching a television program expect to get one thing out of it, and they don’t. I didn’t think the audience would be as open to us being creative songwriters, but the album we had released before going on the show actually hit the Billboard charts because people were turned onto our music. Now people want more than just what they heard on the show.

AC: It was a great opportunity then?

CH: I don’t think we realized how effective it could be for our careers with all of that promotion and exposure. We were both surprised at how they were really hungry for our original music.

MD: When we were first invited to audition, I didn’t take it as seriously as it ended up becoming for me. In the beginning, I thought it was like when a friend says, “I have a extra ticket to a theme park.” I was like, “Sure let’s go.” I didn’t even know duos could be on the show. I thought we would have fun and play music and then it was huge.

AC: Where are you both from?

CH: I grew up in North Texas between Dallas and Fort Worth. I went to the University of North Texas in Denton. I had always wanted to live in Austin and have been here for eight years now, moving right after college.

MD: I grew up here. I had the choice of staying when most people want to leave the town they grew up in. I feel like I’ve grown up with the city as it’s grown bigger. My dad, Chico Oropeza, is a musician. I grew up around all Austin music and was definitely inspired by that.

AC: Now that you two are America’s sweethearts, tell us how you met?

CH: We met in East Austin at TC’s Lounge.

MD: It was where the Sahara Lounge is now – on a Monday night. Everyone would come out and dance to the best blues music in town. Chris asked me to dance. We had never met before. He asked me what I did and I told him I was a songwriter. He laughed at me and said, “I’m a songwriter too.”

Six month later, he showed up at a songwriting showcase that I held at the old Romeo’s on Barton Springs when they were still open. I asked him to come up onstage and play. He did, and I was like, ‘This guy is pretty good.’ After the show, we were having a song circle, and even with the place closing down, we were all still jamming.

My dad was there and said, “Play that one song.” It was one I wrote when I was younger called “Forever Happily.” Chris started playing along on his guitar and singing harmonies as if he heard it before even though he hadn’t. After that, we were together, just like harmonies in a song.