Escaping Austin’s orbit to relax in the grassy fields of Driftwood for the Old Settler’s Music Festival remains a pleasure. The four-day gathering, known for hosting bluegrass and singer-songwriters, has evolved into a showcases for a wide variety of Americana and roots styles, which this year included two hard-buzzing indie acts.

Booker Jean Spivey found herself ahead of the curve this year, scoring Alabama soul upstarts St. Paul & the Broken Bones, who threw down Thursday and Friday. Not only is the young septet, led by improbably white and nerdy vocalist Paul Janeway, riding a tidal wave of industry buzz, but now’s the best time to see them – before the surprise element of Otis Redding’s voice coming from Drew Carey’s body wears off.

Spivey, who scouts talent at national events including Pickathon, Hardly Strictly Bluegrass, Folk Alliance, and the American Music Conference, discovered St. Paul at SXSW 2013 and booked them last year because she anticipated their breakout. Same with Lake Street Dive, Boston’s female-fronted, jazz/soul-influenced indie quartet, who are also glowing red hot at the moment and drew an impressive crowd Saturday night. 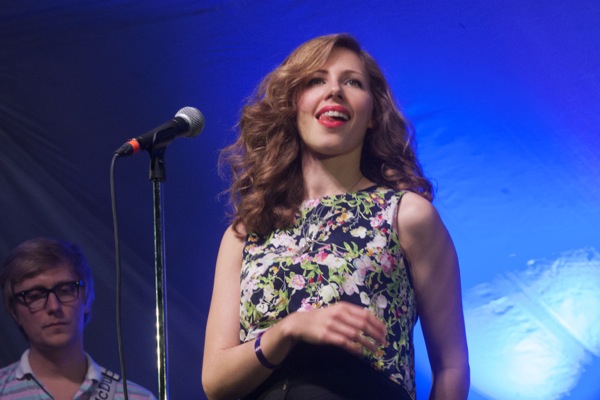 ”I had Lake Street Dive booked for Old Settler’s last year, but they cancelled because the singer was sick,” said Spivey at OSMF over the weekend. “When that happened, the first phone call was to find a replacement. The second was to call them back and say I wanted to book them for next year. I thought something would happen with the band, but I didn’t know they’d play Colbert and Letterman.”

Such opportune timing may account for what Spivey characterized as “increased ticket sales for this year’s fest.” How do young buzz bands with soul influences fit into the musical identity of Old Settler’s?

“You’ve got to have stuff that’s out of the box,” admits Spivey. “But we could loosely call all of this ‘roots.’ As long as it’s in that vein – where it’s rooted in an traditional style – we’re good.”

Scanning this year’s lineup, you had everything from up-and-comers like St. Paul and Lake Street, to the traditional bluegrass milieu of Del McCoury and Dr. Ralph Stanley, whose 87 years excuse flubs during his set Friday, to a young class of singer-songwriters including Parker Millsap, John Fullbright, and Sarah Jarosz, for whom this festival holds special significance.

“Coming back here means everything,” Jarosz, a native of nearby Wimberley, told me after performing to a crowd of thousands on Saturday. “Especially now that I’m traveling all over all the time, it’s a good reminder of where it all began. My first time playing here was in 2002 in the youth talent competition and now it’s really special to look out and see people singing my songs.”

Another high profile singer-songwriter, Jeff Bridges, who ranks somewhere between Jamie Foxx and Bruce Willis on an index of actors turned singers, represented a nice “get” for Old Settler’s lineup this year, even if the Oscar-winning Crazy Heart really has no business singing country songs. Every time Bridges stepped to the mic, all I saw was a man forcing something that wasn’t in line with his talent.

A key component for OSMF is the jam aesthetic. Last year, I watched yoga rocker Michael Franti in that role. This year – same slot, same night, same stage – it was the modern master of pedal steel guitar, New Jersey’s Robert Randolph, pumping positive frequencies through the speakers. Both acts represent bait for the Frisbee and tie-dye crowd, but also music that elates the masses.

Kevin Russell closing down the Bluebonnet stage Saturday and the Camp Ben McCulloch stage on Sunday revealed another analogous example of Old Setter’s scheduling: last year, those were his Gourds’ slots. It’s no easy feat elevating your solo project to the same level as your long-established band, but Russell’s done just that. Should this be attributed to the strength of Russell’s Shinyribs or simply nepotism.

”You know, I’d like to think it’s a little of both,” grinned Russell Saturday. “I won’t deny there’s some nepotism involved, but either way, its encouraging because those are the old Gourds slots and they’re like, ‘Okay, let’s just plug ol’ Shinyribs in there.’ I just told them I really wanted to play, however they wanted to do it.”

Russell’s Sunday slot on the campground stage brings up a necessary point: anybody who thinks that they’re getting the full Old Settler’s experience without crossing the road to the campsite misses half the fun. That’s where the drunks, the volunteers, and the musicians largely reside, so it’s where the party is.

On Wednesday, before anything “officially” started at Old Settler’s, bluegrass legend Peter Rowan played unamplified in the pavilion. In the back of the camping area, there’s a renegade stage called Camp Good Times where Possessed by Paul James performed Friday night.

”It’s not official, but we hook them up with some of our artists like Front Country this year,” nodded Spivey. “And sometimes it’s the other way around. Wood & Wire started off at Good Times and then I booked them for the festival.”

Next year, bring a tent. 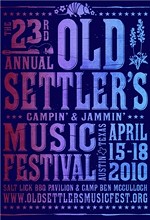 Don't Call It a Comeback
Looking back at this year's Old Settler's Music Fest.