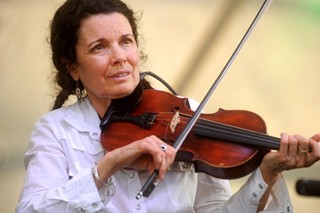 At 4pm during Friday rush hour traffic, it took only 68 minutes to get from the midtown Chronicle offices to Dripping Springs for the second day of the Old Settler’s Music Festival. Five hours later, the trip back was swifter, but you gotta watch for deer on that dark stretch of highway. Our only regrets were that we can’t return today.

Suppertime out back of the Salt Lick, on a day ordered straight from divinity, began with Italian Red Wine. The acoustic bluegrass crew drove behind its mandolinist, but there are no accents in singing. A band introduction just before a John Fogerty cover walk-off – Lucas Bellotti, Martino Coppo, Silvio Ferretti, and Marco Ferretti – that’s another story. Their ear-to-ear grins and thank yous beamed mission accomplished. These sons of Italy had done it: plied their endearing wares at a Texas bluegrass festival.

Nothing’s more disconcerting than pulling up stage front and finding one of the father’s of banjo standing there with his hand in his pocket. Mind you, it was a million-dollar black suit, but its owner occasionally taking that fretting hand out of his pants to examine his nails – a local artist reported a wad of bills in it to make Chuck Berry want to stick him up – made at least one observer pine for that same figuehead leading his band at the Texas Union Ballroom in 2001.

Ralph Stanley’s certainly earned the right to guest at his Clinch Mountain Boys shows, especially now that 21-year-old grandson Nathan leads his papar’s pickers, who dedicated “Sunny Side of the Mountain” to their guitarist George Shuffler, 88, who died Monday. When Stanley, 87, sang O Brother, Where Art Thou? standard “O Death” and “In the Pines,” mortality itself suddenly had a voice.

After attending exactly three shows during the entirety of last month’s South by Southwest – not to mention only 90 minutes at Honk!TX – I wasn’t going to miss a second of Donna the Buffalo even if they did start 20 minutes late due to sound issues that were never corrected anyway. Hardly unwarranted was my insistence, as it turned out.

One of those performances – other than “one South by Southwest when they were promoting Austin Powers” – did to Lamberts what Liberty Lunch’s onetime footprint building does to barbecue today – cooked it. Zydeco such as that stomped by these upstate New Yorkers, founders/hosts of the annual Finger Lakes GrassRoots Festival, usually rises only from Louisiana swamps, and while their OSMF performance lilted more country-folk with Cajun accents than Mardi Gras revelry, dancers knew their cues.

Bookended by “All Aboard,” opening last year’s Tonight, Tomorrow and Yesterday, and frontwoman Tara Nevins f-i-n-a-l-l-y strapping on a washboard – and soloing on it! – DTB’s hour-long set lilted and rolled. From Puryear’s silky Stratocaster solo on “We’re Working on That” to the quintet’s organ-quilted ragga Louisiane, this so-called “Herd” cost me high double digits at the merch table.

Puryear wrapped up at the Bluebonnet tent and quickly found a free table at the back of the Discovery stage set-up for the “Del @ 75” workshop. Hemmed in on both ends by a terrible clatter, first from South Carolina duo Shovels & Rope and then Jeff Bridges’ leaden Southwestern rock, three McCoury men put on a 45-minute Q&A with enough pickin’ and singin’ to take home first prize for OSMF Friday performances.

Sadly no, patriarch and onetime banjoist Del McCoury hadn’t ever played with Ralph Stanley, but he’s known him for decades and had run into him at the hotel that morning. Play something? How ’bout banjo scion Robbie McCoury gunning “Foggy Mountain Breakdown” and Del and mandolinist Ronnie McCoury harmonizing on “I Feel the Blues Moving In.” When the trio got “Going Down the Road Feeling Bad,” the McCourys took off on their instruments – Del on guitar – like greyhounds chasing a mechanical rabbit.

The mass exodus from the Crazy Heart stage gave St. Paul & the Broken Bones a great crowd boost, and the Birmingham, Alabamans knew what to do with them when they got there. February debut Half the City dropped in instant contention for a Top 10 slot with its uncanny encapsulation of classic soul (Otis Redding, Stax, Motown, Al Green), and given contemporary retro acts from Mayer Hawthorne to any number of Dap-tone projects, its creators make equally quick converts live. Dancing ensued.

Sound precluded understanding a single word from singer Paul Janeway, but suspension of disbelief is the name of the game with the stand-up-comic-looking singer: “Is that voice coming out of that guy?” Mos def.

Once it emanated from Gregg Allman, Joe Cocker, and Tom Jones – still does. Janeway as the next generation up? Time will tell.