Arcade Fire – Deep in the Heart of Texas Arcade Fire frontman Win Butler at the Circuit of the Americas, 4.10.14 (by Gary Miller)

As polarizing as Arcade Fire’s fifth album, last year’s Reflektor, remains, the Canadian outfit’s show Thursday night at the Circuit of the Americas proved they’re one of the most dynamic acts working today even as they scale to ever larger audiences and venues.

Aided by a breezy spring night, the outfit, performing as a 12-piece with brass and extra percussionists, delivered a tight hour-and-a-half of pure driving rhythm that rarely stopped to catch its breath.

Though preceded onstage by a cast of bobble-headed characters dancing to “Deep in the Heart of Texas,” which opened the set on a hokey and bizarre note, Arcade Fire emerged to launch “Normal Person” from the new album. In an almost baiting fashion to their critics, the song gyrated with a Talking Heads fervor as it segued effortlessly into frenetic favorite “Rebellion (Lies)” from debut LP Funeral, Win Butler and company making explicit the lineage of their eclectic catalog.

“Keep Austin weird, but not that weird,” shouted Houston-native Butler before launching into the pulsing “Reflektor,” a remark that describes Arcade Fire’s success – innovative and experimental enough to keep audiences guessing, but with a driving current of percussion that maintains focus and broader appeal. The disco-inflected beat and Eighties New Wave flair melding into anthemic 21st century indie rock provides a complex mixture, but one Arcade Fire assembles expertly as the steel drum of “Flashbulb Eyes” shifted easily into the tinkling intro and furious roar of “Neighborhood #3 (Power Out).” The emotional pull of the band’s early work still resonates, yet at the same time powers with an emphatic groove from Tim Kingsbury’s bass riffs.

When Butler took to a piano for the poppy lilt of “The Suburbs,” the show took a softer turn, the frontman leading the full house through a hushed singalong of the chorus before scorching into the biting “Ready to Start” and still-powerful “Neighborhood #1 (Tunnels).” “No Cars Go” lulled midset, but the strutting synth and bass rub of “We Exist,” and sparse, haunting “My Body is a Cage” spun into a spacey trip of “Afterlife” that rejuvenated the energy.

With Regine Chassagne emerging on a platform in the middle of the audience for “It’s Never Over (Hey Orpheus),” playing in otherworldly echo to her husband Butler onstage, the show’s close ceded the reigns to the chanteuse, following with a pitch perfect cover of Blondie’s “Heart of Glass” that matched closer “Sprawl II (Mountains Beyond Mountains).”

In a tight, three-song encore, the band re-emerged with Butler sporting a Pope Francis bobble-head, and playfully ripped through Prince’s “Controversy.” Arcade Fire seems perfectly aware of the controversy they inspire, and revel in its wake with those fans willing to follow, turning “Here Comes the Night Time” into an all-out dance party with enough confetti and streamers blowing in the night to coat the entire sold-out amphitheater crowd. Finishing the encore with biggest hit “Wake Up,” the crowd continued singing along to the chorus of “whoas” well after the band had left the stage.

For those that wanted to keep the energy going, Kid Koala came on afterward with a DJ set while the band rushed to the Continental Club for the official afterparty that found them mowing down an eclectic string of covers as Phi Slamma Jamma. Butler also spun records and added trolling commentary from the back of the club as DJ Windows 98.

The 30-minute set was informal and haphazard, yet also allowed the other bandmembers to take centerstage and more explicitly highlight their talent as they rolled through everything from the Everly Brothers’ “Birddog” to Neil Young’s “Come On Baby Let’s Go Downtown” and CCR’s “Hey Tonight.” Trading vocals among Will Butler, Kinsbury, Richard Reed Parry, and Jeremy Gara, the quartet drifted into the Beatles’ “Run For Your Life,” Dylan’s “You Ain’t Going Nowhere,” and Fifties sway of the Beatles’ “Anna (Go With Him)” and Flying Burrito Brothers’ “Wheels.”

The band also hit the Modern Lovers’ “Government Center” and Ramones’ “I Don’t Wanna Go Down to the Basement” before finally completing their night with the Stones’ “Last Time,” Win Butler joining the crew onstage to thrash through the chorus.

Circuit of the Americas set-list and photo gallery: 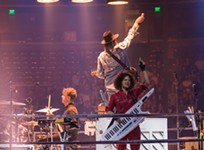