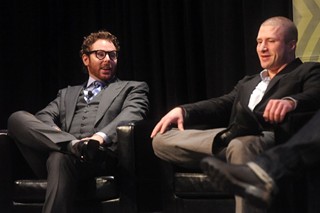 Fourteen years ago, South Park satirized the music hangup of the decade. “Let’s download some Metallica, some Stevie Wonder... Kenny’s right. We should download some Judas Priest, too.” A few clicks later, Kyle Broflovski and the gang were hauled off to downtown South Park by the FBI. The boys from the animated series were using Napster.

The pioneering peer-to-peer downloading software allowed users to share their music collections with the world. After a detective showed them the true horror of what they’d done – Metallica drummer Lars Ulrich had to wait a few months before installing his gold-plated shark tank bar and Britney Spears downgraded from a Gulfstream IV jet to a Gulfstream III – he lectured the elementary schoolers:

“Man must learn to think of these horrible outcomes before he acts selfishly, or else I fear recording artists will be forever doomed to a life of only semi-luxury.”

On April 13, 2000, real-life Ulrich filed suit against Napster, the first case centered on digital downloading using P2P software. The federal district court judge issued a preliminary injunction against the company, mandating that all copyrighted Metallica songs be removed within 72 hours.

Championed by the vocal Ulrich and a slew of other artists, including (in a decidedly un-gangster move) Dr. Dre, the fallout of Metallica v. Napster, Inc. led to the company’s closure a year later. Kazaa, Morpheus, Limewire, BitTorrent, and a myriad of other awfully-named P2P hosts rose to fill the void in subsequent years, resulting in no small share of lawsuits. None of the sites attained the glory of Napster, which gave the download generation its first taste of everything right at its fingertips.

After being volleyed between several companies, Napster still claws on in 2014 under Rhapsody, a paid music-subscription service. Amid platforms like Soundcloud, Spotify, and Pandora, all which offer free versions of their streaming services, the idea of paying for music is all but obsolete. Thanks a lot Napster.

Actor/director Alex Winter debuted Downloaded, a history of online music sharing, at SXSW 2013. The documentary allowed Napster founders Shawn Fanning and Sean Parker to make their case, countered by a flurry of music industry types clinging to outdated models of the business. Years after the original sharing debacle had been shelved, Downloaded highlighted the still-prevalent split of the old guards of the industry and a group that grew up with everything from TV shows to news content with the touch of a screen.

Fanning and Parker are still programming their way to wealth, the South Park boys are still on air, and Ulrich and the rest of his California metalheads are still rich. And this journalist, who stealthily downloaded thousands of files and a few viruses (sorry, Dad) remains thankful for the P2P-enabled crash course in music in an otherwise aurally barren East Texas town.

Here are some of my favorite Napster and P2P downloads that I have now DELETED FROM MY COLLECTION. Don’t worry, Lars. My dad bought all of his Metallica: 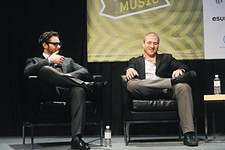