Local foursome about to go even wider thanks to PBS staple 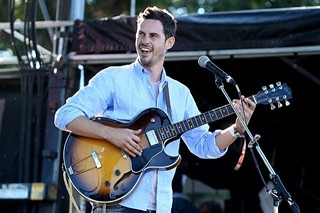 Last Thursday at Stubb’s had a real “Mama, we made it” feeling, what with local treasure White Denim headlining the pivotal 2,500-capacity space for the first time in their eight years together. Monday, Aug. 4, at the Moody stands to feel even more like a local landmark, as the band’s just signed on to tape an episode of Austin City Limits.

The local quartet’s inclusion comes after years of executive producer Terry Lickona’s scouting and adds them to a 40th anniversary class that includes Beck, Eric Church, Nick Cave & the Bad Seeds, and Thao & the Get Down Stay Down. It also gives Austin its first local invitee since Dale Watson in November.

The foursome, Chronicle cover boys for the Austin City Limits Music Festival last summer and again last month during South by Southwest, have enjoyed a mighty fine ride since the October release of fifth LP Corsicana Lemonade, working two runs around the country with one supporting Tame Impala. Then two sets at SXSW, last Thursday’s eye-opener at Stubb’s, and soon they’re off to Europe for dates with the Arctic Monkeys before returning stateside to play Lollapalooza before this homecoming at the Moody.

In less quantifiable terms, today’s announcement opens the band’s appeal unto an entirely new set of listeners. Much like sessions for radio stations like Los Angeles’ KCRW and Philadelphia’s WXPN broadened their scope to cool aunts and coastal cousins, an airing on PBS staple Austin City Limits puts the band in front of PBS supporters like my grandfather, a man who, despite his aging wits still largely with him, is in for a real surprise at the first hint of “Shake! Shake! Shake!”

ACL’s site notes that singer James Petralli “graced the ACL stage” in 2011 as a singer backing Preservation Hall Jazz Band. No doubt this one will go down as the finer career highlight.