“Grandma’s a rebel, raised by the devil.” So shout Jonny and Carley Wolf in the coda to the Ghost Wolves’ “Shotgun Pistol Grip,” reminding us all that the best refrains are often the simplest.

“The guitar was a wedding gift from a dear friend and has an inscription on the back about love and music,” explains drummer/vocalist/husband Jonny Wolf. “When he gave it to us, it only had one string, so we thought we’d hang it up as a wall piece at our house. Carley was curious one day and plugged it into her amp, cranked it up, and it had this beastly tone.

“So we started writing songs specifically for it.”

Like much of what’s been heard from the Ghost Wolves, who’ve released a debut EP as well as a single collaboration with Austin frequenter BP Fallon since forming in 2011, the track evokes Link Wray’s primal guitar heroics and the gritty sexiness of the Cramps. Such campiness persists in the live show, with Carley dressed like a punk rock Dolly Parton all in white, Jonny wearing black, and a menacing wolf mask hanging on a microphone stand.

The 10 studio songs on Man, Woman, Beast were recorded locally at Congress Ave. facility Arlyn Studios. Three live tracks, capturing the raw fuzz of their performances, will also be included. 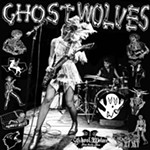