Things that go bump in the night: ‘The Nocturne Diaries’ 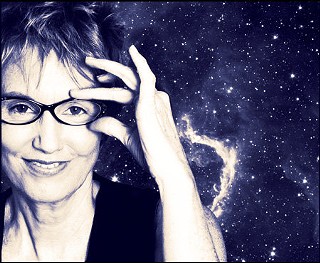 Further evidence of Eliza Gilkyson being amongst the most revered contemporary folksingers arrives on her new album, The Nocturne Diaries. The longtime local celebrates with two shows Saturday at the Cactus Cafe. Our recent talk centered around songs that appear in the night.

Geezerville: Your son Cisco Ryder has producing credit on the new album. Is that a difficult position for him, being son and producer?

Eliza Gilkyson: Well he’s co-producer. He’s played with me for so many years the control has been slowly moving out of my hands into his. It’s been a natural transition. Years ago when he started playing with me, he stepped into road managing. Then, because he had such great ideas, I started listening to them. He has an incredible ear and feel for production. I could tell just from the stuff he was listening to that he had amazing taste.

He started with the Red Horse project I did with John Gorka and Lucy Kaplansky. I gave him four songs. He did so well with that as a sort of a trial run. And we get along really well. I mean, there are times when we don’t agree. We vehemently disagree. Then the best argument has to win. Only a couple of times has there been an emotional freakout because we felt so strongly about something. What I love is that he really cares. He feels very strongly about how he’d like to hear me. As I got older I felt uncomfortable giving control to someone I don’t know. I just can’t do it.

G: This album sounds edgier than some of your work in the past. Would you agree with that?

EG: Yeah. That’s really his influence, the way he had me build the songs this time. It was more about, “Let’s find a way so that you’re not singing against an acoustic guitar each time.” It’s what folksingers do: you play alone with a guitar. He said, “Let’s focus on your parts, so it’s not just a folksinger jamming on a guitar.” It was really fun. We were in the woodshed a lot and that’s why it took so long to make the record. I tried recording the songs a bunch of different ways until I felt it intimate other things and it ended up being really sparse and different than what I’ve done before.

G: The focus of the songs is night time, as well as the influence that time of day has on songwriting.

EG: I didn’t realize it until after I compiled everything. Every single song was written deep in the middle of the night. I’d wake up having something on my mind, something bothering me or a song idea. I’d get up and write. My husband gets up very early and there were times when he’d be getting up and I’d be ready to go back to bed. We were like ships passing in the night.

G: Have you ever written a song that came to you in a dream?

EG: I have. But these were all a-ha moments that I’d had in the middle of the night. A lot of them were processing things that I’m worried about or scared of. There’s a shadow side of things. You know at night you can’t really run away from your thoughts. In the day you can get lost in survival mode or work mode. At night there’s really no escape.

G: Some of the subjects you tackle are scary in themselves. There’s the high school student that plans on murdering people. One song that stuck out to me was towards the end of the disc, “Song Without End.” I heard it as anti-organized religion. Is that correct?

EG: That’s part of it. When I look back on that song I think what was really bothering me was that people have these constructs, especially in religion. We build these elaborate constructions in order to placate ourselves and the things that we’re afraid of. They’re too great a mystery. We come up with these formulas for them and then we go to war or fight over them and we don’t even wonder why we constructed them in the first place. So it’s more about belief systems including religion.

But it could be capitalism or Americanism or any of these things, these isms. There’s a view that humans are going to go on forever. I’m saying, “Maybe not, but can we live and be decent human beings without knowing that or all these constructs.”

G: What struck me about the song was that you take phrases from scripture or books of knowledge and sprinkle them in the lyrics. You point the way, but are never explicit about it.

EG: I like people to fill in their own gaps. I don’t want to be too literal, especially when it comes down to intellectual thought.

G: I don’t know if you saw it, but there was a study released recently by NASA that said they didn’t think civilization as we know it is going to survive the 21st century.

EG: Well, I think that’s the main point behind this song. Don’t be so arrogant. Because we think we’re going to live forever we’re unable to assimilate reality and the facts that say we may not. It makes you wonder if the human experiment is a failed side car.

G: There are definitely signs that things are not the way they should be.

EG: And it’s getting critical.

G: We’re pointed in a direction that’s critical and most people aren’t aware of it or don’t even want to acknowledge that it exists.

EG: I think that’s the underlying theme of this record. You’re looking at a culture in decline. These songs are very much about that. It doesn’t mean there isn’t beauty and so much to value in front of our faces. I make sure to point them out on the record. I have to find a way to say it artistically without standing on the corner with a sign that says “Prepare to Meet Thy Doom.”

EG: Exactly. I’ve got to do better than that!

G: The last song, “All Right Here,” is hopeful. You point the way inward to find out what’s real.

EG: You have to find your joy where you may. You find your blessings and make sure you recognize them. Very often they’re very close to you. 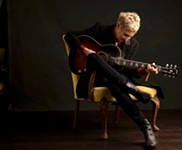