With the exception of Willie Nelson, who both hosted a party on his ranch in Luck two days before helping to close out the iTunes Festival at ACL Live at the Moody Theater on Saturday, it’s tough to think of a local band who mixed the comforts of home with the chaos of SXSW quite like White Denim.

The Austin quartet, five months removed from the release of fifth album Corsicana Lemonade, proved the Live Music Capital’s best showcase, getting tapped to play Jimmy Kimmel’s late-night week in town. The show had everything to do with the city – from the monologue and Austin-themed set to constant brisket references – and its producers’ predilections were obvious: Get a local group that best represents Austin. Through four songs, White Denim sounded tight under the Monday night lights.

Yet there they stood Saturday afternoon looking for stage space and a microphone cord out back of the Kebabalicious on East Seventh, where they played an unpublicized set to 35 people one hour after the rain hit. Sound difficulties precluded the fourpiece from ever settling into a full groove, but they took requests (“Radio Milk/How Can You Stand It”), ran through hooks with no lyrics, and generally waded forward with little concern for cohesion or formity.

Saturday night, they played their official showcase. Tucked into a corner of Clive Bar on Rainey Street, the band rolled straight from the gate, segueing “At Night in Dreams” into “Mirrored in Reverse” and “Drugs” before dipping around “Corsicana Lemonade” and “Rivers to Consider.” They sounded tight and refined – practiced, cohesive; far more like the Kimmel set, or their truncated set last fall at the Austin City Limits Music Festival, than at the backyard jam session from earlier in the day. 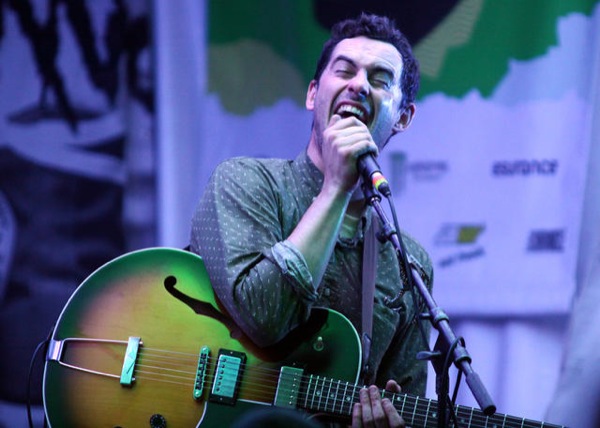 Singer James Petralli wasted no time throughout the 45 minutes, addressing the audience sparingly as the band medlied around “I Start to Run,” brought soul to “A Place to Start,” and flexed serious vocal chops on “Cheer Up” and “Come Back.” Instrumental “At the Farm” moved into live thriller “Say What You Want” and they were off, left with a month to rest up before hitting Stubb’s April 3, cruising to Europe in early May, and not coming home until late June.

Twenty-four dates in 10 American cities and seven other countries. That's the kind of run that will have them pining for Kebabalicious.