Four waxmen wear their grooves OUT

“I wish you guys could see the stage. It’s a fucking mess,” said Stones Throw founder Peanut Butter Wolf at the end of a magical Saturday night at Eastside haven the North Door. “There are records everywhere.”

That’s what happens when four of the deepest vinyl collectors in the world tag-team three-plus hours of continuous jams, all 45s. The night was a celebration of the documentary Our Vinyl Weighs a Ton: This Is Stones Throw Records, which screened earlier in the day.

Dam Funk proved the most charismatic of the quartet, singing along with his deep well of Eighties boogie and calling it out if the crowd needed schooling: “The Holt Brothers, 1984, ‘Dance with Me,’ Monti Records!” 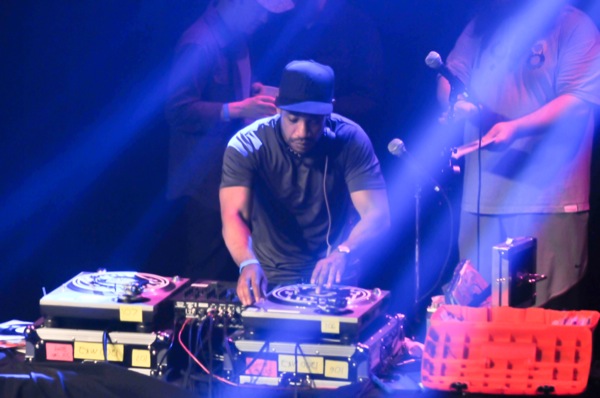 An oddball visionary, Madlib chopped jazz breaks and pushed the envelope of what can be played in a club, making the most incongruous tracks perfect partners. He even tossed a couple choice records into the crowd when he was through with them.

The vibes were already right when JuiceLand owner Matt Shook sponsored an impromptu open bar for 30 minutes. How much did that piece of guerilla marketing set him back? “I haven’t seen the bill yet, but less than Doritos paid for Gaga,” he quipped.

In a show of vinyl oneupmanship, the four waxmen rotated one record at a time during a 45-minute finale. It was like a musical game of H.O.R.S.E., à la Jordan vs. Bird.

“We love our records,” Wolf gushed towards the end of the evening. “I don’t care about money, but I care about records.”