You may not know the name, but you sure as hell know the music

You may not recognize the name Dave Bartholomew, but you surely know his music. The song “Blueberry Hill,” which he produced for Fats Domino in 1956, continues to sell today. And sell, and sell, and sell. “Fifty million copies and counting,” his son Don B pointed out. 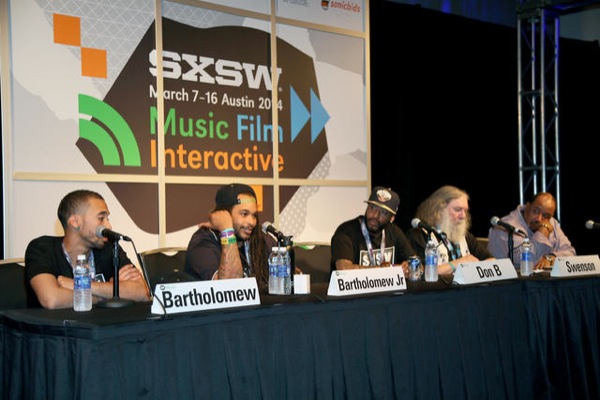 The elder Bartholomew, now 92, was scheduled to appear on the panel, but was unable to travel from New Orleans according to his other son Ron, who took his place. Led by noted music writer John Swenson, it was a compelling hour nonetheless.

Pointing out not just the Rock & Roll Hall of Fame inductee’s influence on American music, but how all three generations continue to impact the New Orleans music scene, Swenson gave the floor over to Don B and Ron, who spoke of how their father was more than just an influence on them.

“Yes, he was a great artist,” acknowledged Ron, “but multiply that by 100 as a great dad.”

His grandsons, Blake and Don Jr., are vital in NOLA’s contemporary hip-hop and R&B scene and there was the occasional, good-natured familial dig across generations on the type of music they enjoy and enjoy making.

Swenson noted excitedly that after Hurricane Katrina, Don B found some cassette tapes of previously unreleased music by the patriarch of the family and is readying them for release later this year.

All in all, an important history lesson and an intriguing glimpse into a dynastic musical family.