It’s the nature of a beast like this tribute organized by Alejandro Escovedo and Richard Barone that the constant turnover of artists kills momentum. Despite all the equipment adjustments, unprepared artists, and unplanned additions, the show moved along efficiently enough to finish a half-hour early. 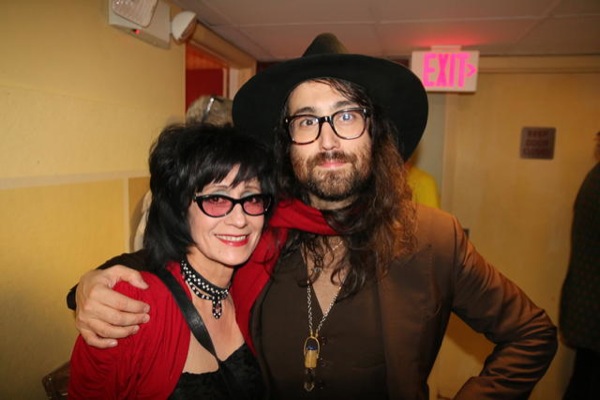 Credit a stellar band, including New York greats Clem Burke, Lenny Kaye, Ivan Julian, and Tony Shanahan and prized local strings Susan Voelz and Brian Standefer, plus Barone’s experience putting on these kinds of shows in the Big Apple. Which isn’t to say there weren’t significant stumbles through the repertoire.

BP Fallon’s fey voice and mannerisms didn’t gel with the Strypes’ raunchy assault on “Vicious,” one of Reed’s ugliest putdowns. Louise Goffin sang “Perfect Day” prettily, but with a detachment that indicated she’d never heard it before she learned the words.

Most embarrassing was the Fauntleroys’ demolition of “Waves of Fear.” Escovedo’s somewhat-supergroup with songwriter Nicholas Tremulis, guitarist Ivan Julian, and Miracle 3/Baseball Project drummer Linda Pitmon staggered through two false starts, and once they locked into a tempo it became clear that no one knew the words. Not even Tremulis’ nasty slide and Julian’s stinging solo – appropriate, given that the original showcases Julian’s former Voidoid partner Robert Quine – could save it, a fact Escovedo acknowledged throughout the rest of the show.

Highlights came at every turn thanks to unexpected song choices. Cheetah Chrome eschewed Reed’s rockers for the storytelling of “Romeo Had Juliet,” while Suzanne Vega’s aloof vocal style drained “Walk On the Wild Side” of its moldiness. Jesse Malin raved up funk pastiche “Sally Can’t Dance.” Steve Wynn, after acknowledging the Dream Syndicate getting constant Velvets comparisons, led his Miracle 3 through the pop of “Coney Island Baby” rather than a noisemonger. That was saved for the Baseball Project, as the National Pastime-themed power poppers gave “Sister Ray” an appropriate razor burn.

Escovedo at last performed a full-length version of “Street Hassle,” rather than the excerpts he drops into “Gravity/Falling Down Again,” and other happy interpreters included Cindy Lee Berryhill (“Femme Fatale“), Reed champion Bill Bentley’s local Hole in the Wall gang the Bizarros (“Cool It Down”), and Sean Lennon getting off impressive guitar lines during “What Goes On.”

And are there any other songs in the Reed repertoire more appropriate for Wayne Kramer and the Fleshtones than “Kill Your Sons” and “Real Good Time Together,” respectively?

Whether this show goes into the SXSW trophy case will be determined over time, but the love for Lou flowed freely, and that real good time the Fleshtones championed was had by all.