SXSW Panel: From Riffs to Bits

This is your life James Williamson, you Stooge you

James Williamson, Texan by way of Detroit, practically invented the punk rock guitar riff when he co-wrote “Search & Destroy” with Iggy Pop. That led to one of the most insane journeys a rock & roll musician could have: From garage bands, reform school, and the Stooges to disco producer, Silicon Valley techie, corporate VP, and re-birth as a Stooge. 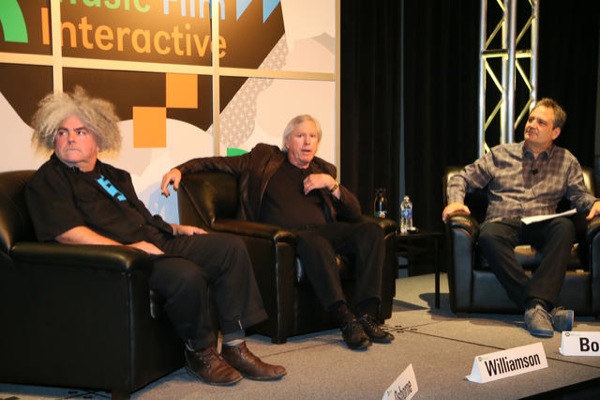 Throughout, Williamson flashed a dry sense of humor: “I finally figured out this guitar thing wasn’t working out,” so he shifted into the high tech sector and started a family. Osbourne weighed in with some devastatingly funny color commentary: “I like that David Bowie was the ‘adult’ on the sessions,” he quipped after Williamson described the recording of Raw Power as “the adults left the children to their own devices.”

Finally, at the end, Williamson strapped on his Les Paul and began deconstructing his own Stooges riffs, pointing out the genealogy of “Shake Appeal” and “Search & Destroy.” He didn’t realize parts of “Search & Destroy” descended from the Ventures’ “Walk Don’t Run” (“Oh, cool. I like surf music”) and the Rolling Stones’ “Jumpin’ Jack Flash” and “Street Fighting Man.”