Superchunk leader and Merge Records founder Mac McCaughan showed up to Mellow Johnny’s bike shop downtown with just an acoustic guitar and some songs. Shocking, right? While there wasn’t much rockness to it, stripped of the thrash and pop, some of the songs hold up remarkably well. Others less so. 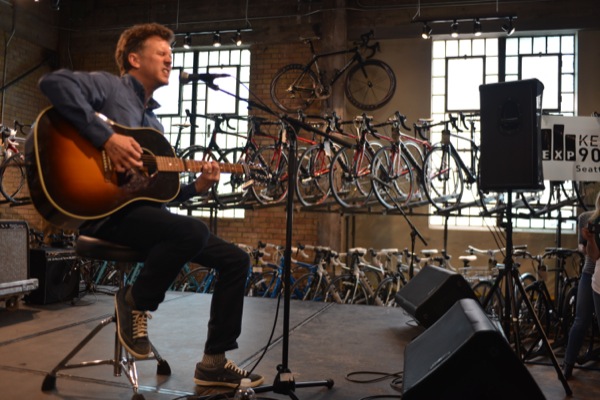 Fitting nicely into the former category were a trio of songs from last year’s Superchunk comeback, I Hate Music, the best of which was “Overflows,” a song McCaughan copped to never having played live. “Breaking Down” and “Me and You and Jackie Mittoo” were similarly smooth on just an acoustic. Dare we say the latter sounded macka fat?

On the other ends of the spectrum was closer “Detroit Has a Skyline,” which fulfilled a request, but doesn’t work as well without full-band backing. In between were a couple of Portastatic songs from Summer of the Shark and Be Still Please. Gonna guess McCaughan hasn’t spent a significant amount of time wandering amongst the masses, because he opted not to go with “Through with People.”

Throw in a couple of tracks from Superchunk’s recently reissued Indoor Living (“Watery Hands” also holds up) and that was pretty much it. Short and to the point, though the point could’ve had a slightly better song selection. Given McCaughan’s catalog, that’s totally nitpicking.