You know the set list by heart: “Your Phone’s Off the Hook (But You’re Not),” “White Girl,” “Los Angeles,” “Beyond and Back,” etc., etc., etc. X has been actively playing a set containing nothing but the best of their first four Eighties LPs and no new material since original guitarist Billy Zoom returned right before the millennium.

It matters not. A catalog this strong, with a poetic noir vision of down-and-out-L.A. that redefined punk rock as a bohemian lifestyle, deserves to be aired often. Rootsy riff rocking this taut, this muscular, remains rare, especially after nearly 40 years. 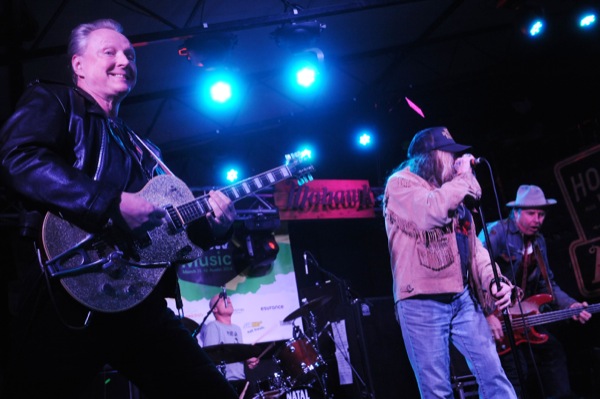 Witness: demon punkabilly guitar whiz Billy Zoom nonchalantly tossing off blazingly complex Gretsch runs; DJ Bonebrake executing the most orchestral drum figures in all of punk rock; John Doe holding down the rhythm in a deep freeze; and new Austinite Exene Cervenka swaying in an ancient buckskin fringe jacket while harmonizing with Doe like some Gregorian banshee. It’s enormously exciting and loud, drenched in one of the greatest guitar tones in all of punk rock.

How X manages to flash musicianship well beyond the standard regulation punk while remaining basic and energetic is certainly a modern marvel, one science can ill explain. Meanwhile, over the Mohawk wall, a car careens through a traffic barrier into people standing outside waiting.