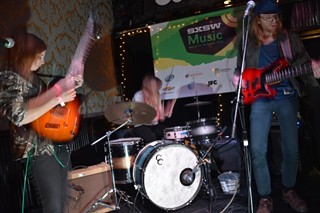 In the wake of a well-received set from epic dance rock dramatists the Black and White Years, fellow locals Mirror Travel had their work cut out for them at Wednesday’s Modern Outsider showcase. With a darker, more cutting style, the Austin trio formerly known as Follow That Bird could only do so much in the way of accessibility.

Nevertheless, they made themselves heard. Borrowing sonic layers from the 4AD catalog, the unfinished post-punk veneer of the band’s earlier work has evolved into a more fleshed-out beast. Despite her stationary position and shy between-song banter, guitarist/vocalist Lauren Green cut a commanding presence on the cozy Parish Underground stage.

Her reverb-soaked guitar work created an aural illusion of two or more axe grinders working together. The only drawback to the heavy effects was Green’s voice getting lost in the echo chamber. While ethereality often reduces vocals to an afterthought, Green’s distinctive delivery deserved a better hearing.

“I Want You to Know,” from last year’s acclaimed Mexico, found all the parts. Brinkley started with a menacing garage punk bass line, then Green unleashed a glorious squall redolent of sirens screaming through tunnels as Lanmon bashed away toward oblivion. Think shadows and fog with a chance of rusty rebar.