Brazilians kick out the jams 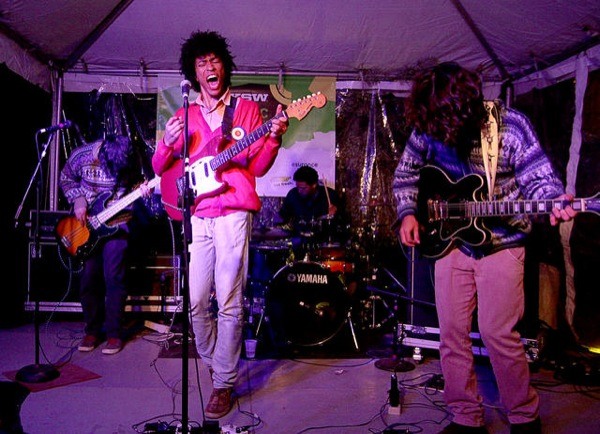 From the Goiania-based group’s first cymbal crash it was clear their concerts are much heavier than their self-recorded debut, As Plantas Que Curam, released last year by Mississippi’s Other Music imprint. That was evidenced early, with a driving version of psych pop gem “Luciferandis,” while a hefty crawl to “Despreolpar” demonstrated songwriting delicacy undisturbed by volume.

Mop-headed singer Fernando Almeida, looking Cobain-like with his cardigan and Fender Mustang, delivered his playful vocal melodies in Portuguese, his feminine voice floating above the warped heaviosity of lead guitarist Benke Ferraz. It was the latter bandmember, with his maxed-out tremolo pedal, who stole the show with his phenomenal riffing, which peaked with a relentlessly extended take on “Doce” that bounced between reggae and power rock and concluded their set.

It was the start of a long journey for the young, but impressive band, whose tour schedule stays constant until June. They were wise to begin in Austin though, because the local ears they turn this week will return for seconds when the Boogarins circle back and hit Austin Psych Fest on May 3.