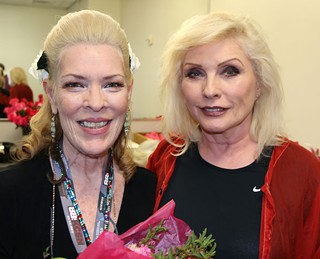 Minor Mishap Marching Band circled the room in yellow and black suit jackets. Everyone was there to tribute this musical oasis called Austin. Welcome to Texas, y’all.

“Tonight is about celebrating Austin music on a night when the whole world is in town,” emcee Andy Langer announced at the onset of the 32nd annual Austin Music Awards, the last ceremony run by departing Chronicle senior writer Margaret Moser. “For a long, long time, the center of the musical universe revolved around this woman.”

Wednesday’s awards ceremony functioned simultaneously as town prom, homecoming, graduation, and retirement party. The four-hour marathon packed 1,000 people into the room with a combination of musicians both local and national, industry drop-ins, and vintage Austinites with their children and grandchildren. Many there had attended expressly for the send-off of Moser, who, dressed in a black dress with her eternally blond hair held high up on her head, had no reservations about holding center stage.

In fact, Moser, who’s handled every component of the event’s production since 1982 save for three years in the late Eighties, was first in the winner’s circle – appropriately enough – taking home the Cindi Lazzari Artist Advocacy Award. Then came a cause close to her heart: the Youngbloods Choir, a youthful conglomeration of musicians born to some of Austin’s finest players. They’d all been raised to play and as such had been tutored in one form or another by Moser.

Up came Will Sexton’s daughter Finley, then Grace London and Sara Hickman’s kids, Lily and Io, all reminders that a young Lucinda Williams started out busking here. The Ziolkowskis, Victor, David, and their dad Vic (Two Hoots & a Holler), were next, playing surf rock in black suits and red ties. Charlie Sexton’s son Marlon, flanked by Jon Dee Graham’s impresario whiz kid William Harries Graham and their band the Painted Redstarts, brought rock with faint glimmers of the True Believers.

Awards happened. One went to Empire Control Room for Best New Venue, another to Francis Prève for EDM. Quiet Company accepted Best Rock Band and shilled for fellow locals Wild Child (Best Indie) and Danny Malone, while metallurgists Dead Earth Politics, who claimed they spent all their money on the suits they wore last year, urged everyone to check out Critical Assembly, Shadow Scene, and Fear Control.

“Metal has a place in Austin,” they swore. Those four bands would prove it.

“Part of Nick will remain with everyone who crossed his path.”

There were more awards – three for flapper-era swingers the Jitterbug Vipers (a clean sweep of Drummer, Bassist, and Electric Guitarist) – one for Emily Bell (New Artist), three for the largely unknown Jonny Gray (Single, Male Vocalist, Folk), and a historic nab for Riders Against the Storm, crowned Band of the Year in a first for an Austin hip-hop group.

Not lost in all the acceptance speeches was the evening’s true entertainment: Asleep at the Wheel’s Ray Benson‘s cruising through “(Get Your Kicks On) Route 66” with cooking combo Church of Monday and centerpiece organist Dr. James Polk, once Ray Charles’ bandleader. Francis Prève, meanwhile, cranked some Zeppelin.

Nor did they get to see Moser’s own personal soundtrack, the Texas Tornados – led by Doug Sahm’s eldest son Shawn Sahm – rip through three Lone Star standards including “Mendocino” and the Sir Douglas Quintet’s fabled “Give Back the Key to My Heart.” ATX blues deities Jimmie Vaughan, Lou Ann Barton, and Derek O’Brien then began the cavalcade of local musicians assembling onstage for Moser. The Flatlanders, Marcia Ball, Denny Freeman, Shakey Graves, Bright Light Social Hour, and on and on (see photo gallery).

Closer “She’s About a Mover,” a song about a girl you can’t take your eyes off, rang Austin’s bell: “Well, she was a-walkin’ down the street, looking fine as she could be.”

Must be Margaret Moser.