Rock has lost its innocence and grit but not these Savages

With its warrens of vintage vinyl and ancient posters advertising rock & roll and blues from the middle part of last century, Antone’s Records was the perfect venue for Boston’s Barrence Whitfield & the Savages heated performance Wednesday afternoon. 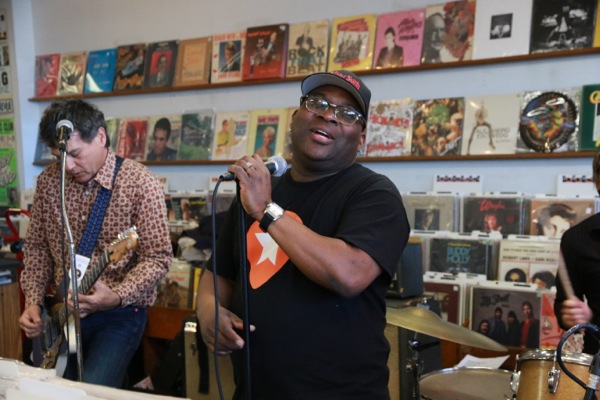 Their music roars back to a similar time frame, when music had a dangerous edge even if it was being made by musicians dressing stylishly right down to their spit-shined shoes. Meanwhile, Whitfield remains a marvel of contradictions.

Only reunited with the Savages within the past few years, he’s soft spoken and erudite when not performing. As drums begin to wallop and the saxophone blares, however, he’s transformed into a begging, screaming shouter of a most mighty and otherworldly sort. There’s nothing progressive or intricate about what they do, taking cues from the Excello Records catalog and occasionally riffing as hard as the Ramones.

Early in the 45-minute set, they performed “Bip Bop Bip” with a hollered, “ow, ow, ow” refrain. Antone’s was solid with fans, so the most dancing anyone could achieve was to hop in place as Whitfield led the bouncing and shadowboxing during “Willie Meehan.” Rock music has lost its innocence and grit, but the Savages, making their SXSW debut, returned a chunk of it.