This was undoubtedly the smallest stage HyunA has occupied in quite some time. The 21-year old South Korean has amassed over 100 million total YouTube views between her two smashes “Ice Cream” and “Bubble Pop.” That’s the capacity of Red River dance mainstay Elysium 500,000 times over.

Marked by elastic, Missy Elliott-esque music videos and some of the purest pop choruses in the planet, HyunA remains a thoroughbred superstar. The United States could be her greatest conquest. 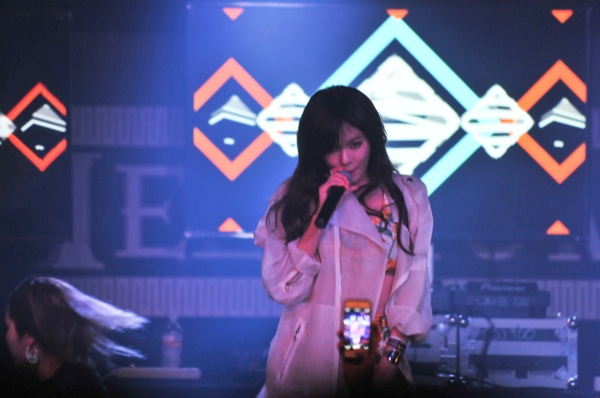 This may be the house that Psy built, but never call HyunA a novelty. A 15-minute, four-song set capping off a Korean pop showcase served mostly to demonstrate her talents to a hungry industry. It was her first solo show on U.S. soil.

Flanked by four backup dancers and a safety-net backing track, the nascent headliner swallowed her agitations and dove headfirst into “Bubble Pop,” one of the clarion calls of K-Pop. Koreans breezily sang along and Americans held their phones aloft, perhaps bewildered they were finally hearing a song that exclusively lived in cyberspace for over two years in the flesh. Lady Gaga watched silently from the rafters.

HyunA nailed the verses. Landed the choreography. Moved on to this next one. You get the sense that she’s being groomed right now, slowly tested for a new, cross-Atlantic market. There were a number of old white men staking their claim. HyunA thanked us in adorably stilted English.

“Bye, until next time!” she chimed.

Next time might be a lot sooner than we think.