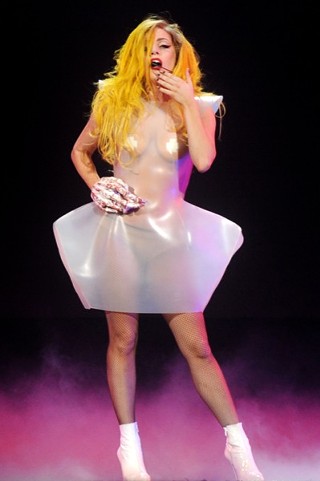 After weeks and maybe even months of speculation and more than a few mega rumors – Neil Young, Paul McCartney, Pussy Riot – this week’s sponsor, South by Southwest, has finally put forth its Music fest keynote speaker. Prepare thyselves for Lady Gaga.

Those consumed by social media have been debating the singer’s presence in Austin since last Tuesday, Feb. 25, when the Austin American-Statesmen reported that the City, citing safety concerns, turned down a permit allowing the pop megastar to put on her live spectacular for the Doritos stage on E. Fifth, a parking lot located beside a hotel behind Esther’s Follies.

Questions concerning her arrival – in conjunction with SXSW’s lengthy delay in naming a keynote (last year’s announcement of Dave Grohl came in Nov. 2012) – gave rise to assumptions about La Gaga’s prestigious placement as featured speaker. A walk through the SXSW offices the afternoon the news leaked seemed to confirm those suspicions. No confirmation appeared in the aftermath.

Until 7am Thursday, that is, when SXSW, Doritos, and Gaga made public their securing a venue for the singer’s mini monster festival: 2,500-person capacity Stubb’s, performance destination of last year’s keynote and site of Metallica plugging in for Guitar Hero at SXSW 2009. Damn near everybody in Austin got decreed a sellout after that: SX, Gaga, chips. Chuck D jumped onto that same vending machine stage last year with his rap crew Public Enemy and urged “Fight the Power” for a crowd of prim haircuts and push-up bras, but nobody flushed his credibility.

The dance diva, born Stefani Germanotta, is no different than Dave Grohl last year, or Springsteen in 2012. Don’t like her? They got Black Milk. Go see Soundgarden. Don’t miss Cody Chesnutt. And don’t get all self-righteous. You’ll show up when your band plays Doritos next year or the year after, because that genie’s out of the bottle too.

This year, Doritos and Apple are paying for the big names. So you’re no Gaga fan, don’t care for iTunes Festival headliner Coldplay. Turns out Apple paid for Willie Nelson as well. Next year it’ll be Facebook and Ford shelling out millions so that someone like me can see his favorite local band, White Denim, on a huge stage for free while scarfing down Nacho Cheese-flavored snacks, as happened in 2012.

One year after the release of fourth album Artpop, a commercial dud in that it didn’t live up to the lofty expectations set by third disc Born This Way, which went double platinum stateside, and debut The Fame, which shipped 15 million copies worldwide, Gaga joins a list of keynotes that in recent years includes Quincy Jones, Bob Geldof, and Smokey Robinson. She’s the first woman keynote since Lucinda Williams in 1999, but more importantly, Gaga’s the first truly active participant in contemporary pop in the festival’s 28-year history.

Critics abound on Gaga’s credentials as a keynote, but those who lobbied for a more prestigious name like Paul McCartney or Name Your Own Gray Hair are guilty of pining for yet another trip down memory lane. While it’s true that Grohl, Springsteen, and Robert Plant are still making music, their musical perspectives are rooted firmly in the past. Grohl and Springsteen’s speeches pertained to the histories of rock & roll. Gaga’s modern with a keen eye on the future, no matter how it sits with the older guard. In that last regard, remember she holds a cosign from Tony Bennett, who recently collaborated with the New Yorker on the soon-to-be-released Cheek to Cheek.

And consider, just for a second, the crowd she brings with her. Those Little Monsters aren’t parasites. They’re Deadheads. They’re UT horns. They’re mass adorers only in teenage and queer form, two sects of the music population frequently marginalized by mainstream festivals. Gay Place provocateur Kate X Messer said Thursday her phone was ringing off the hook with friends elated at the prospect of Lady Gaga returning to Austin for the first time since 2011.

“This is like Madonna descending into town 20 years ago,” she exclaimed. “It’s huge!”

Gaga’s a 27-year-old dance banshee with leotard leggings and meat slabs for shoulder pads. Pay no mind to whether or not she’s good for music in 2014 and remember that she is music in 2014 – Macklemore, Lorde, and “Gangnam Style” wrapped into one. She’s coming as the centerpiece of the industry’s grand banquet with more relevant talking points than Grohl, Springsteen, and Geldof combined. A huge get for the SXSW panels team and Music manager James Minor in his first full year at the helm.

So Red River becomes even more of a madhouse for three hours on Thursday when a woman with a wild haircut walks out onto Stubb’s stage and sings “Applause” and “Do What U Want.” Roughly 10 hours later, Friday, March 14, 11am, she delivers a speech about the here and now.