SXSW: Big Boi But No Outkast at Cedar Street

High hopes for a festival reunion by the Atlanta rap duo 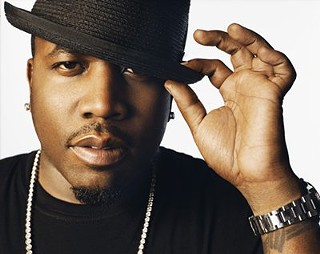 Peace out to everyone who was wait-listed last night for Big Boi. The 400 of us that got into Cedar Street Friday didn’t get to see Outkast either.

Speculation – hope, really – concerning a potential SXSW reunion of the seminal Atlanta rap duo began in earnest last month, the boyfriend of a Motorola sales associate told me, when a VIP code went out to a few hundred guests of Verizon for a party promoting Big Boi. News hit the masses, and the masses registered. On February 21, when the communications giant opened invites to the gratis showcase, sign-ups filled in three hours.

Those working the event suspected tens of thousands had been tossed onto the wait-list. Most stood no chance of getting in, one promoter offered in the afternoon. By showtime, 11:05pm, hopefuls had assembled outside the alley-like entryway on Fourth Street.

If it’s of any consolation, those kept from attendance missed little they can’t get elsewhere over the next eight days – a night of free drinks complimenting an hour’s worth of blockbuster raps from one of the genre’s preeminent artists. And whereas doors for the event opened at 8pm, Big Boi and his company didn’t come on for another three hours.

During that time, guests were treated to the sounds of a Chicago DJ named Real Talk, who wore a denim shirt and red bow tie and pleaded with those in attendance to tweet hashtags such that they’d appear on a big screen. The crowd, an uneven mix of techie types and a few you’d expect to see at any other hip-hop show around town, continued their conversations when Real Talk suggested they introduce themselves to neighbors.

“Who’s excited to see Outkast?” he shouted at one point, perking up the crowd. Then the kicker: “Like who got a ticket to Coachella?”

Big Boi did his best to bring Outkast’s Caddy stank. He employed a guitarist and a backup singer, with Organized Noize squad member Sleeper Brown in as a hype man. He even trotted out he and André 3000’s longtime DJ Cutmaster Swiff.

Opening with “ATLiens,” BB then broke out “Skew it on the Bar-B,” “Rosa Parks,” and “Apple of my Eye,” the first of five tracks from Sir Lucious Left Foot: the Son of Chico Dusty. It became obvious after “B.O.B” there’d be no reunion, as another string of Outkast raps soundtracked a steady exodus. Tough to keep more than an hour’s worth of anybody’s attention after they’ve spent the previous three in a fishbowl of free Maker’s Mark.

Big Boi’s not scheduled for anything else this SXSW, but he’s got nothing on his show schedule and could probably think up a number of reasons to stick around ATX a couple days. Meanwhile, André 3000’s not confirmed for anything around town this week either, but Jimi: All Is by My Side, which he stars in, premieres at the Paramount Theater Wednesday, and there’s a free Hendrix tribute on Friday in Butler Park.