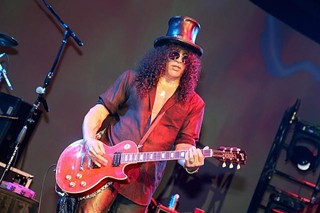 South by Short Wallet? The dream’s still possible. Between in-stores, day parties, Flatstock, the Gear Expo, and South by Southwest’s free concert series in Butler Park, the music festival that’s A Million Music Festivals in One posted its schedule for the latter.

What traditionally occurs every SXSW at Auditorium Shores now moves just across Riverside Drive to Butler Park, adjacent to the Long Center and Palmer Events Center. Last year, that was the Flaming Lips, Cafe Tacuba, and a tribute to Levon Helm.

This year’s crop begins with Slash-anchored fireworks for Jimi Hendrix, subject of Outkast MC André 3000’s new biopic on the psychedelic six-stringer, which premieres at SXSW Film. On Friday, Foster the People takes its brand new sophomore disc out for a spin alongside Washed Out, and Young & Sick, who dish out a healthy dose of indie melodies. Saturday’s celebration of Memphis soul starring Snoop Dogg crowns the weekend.

These shows are free with registration for a SXSW Guest Pass, which requires you sign up through Facebook and provide your name, gender, email, and date of birth.