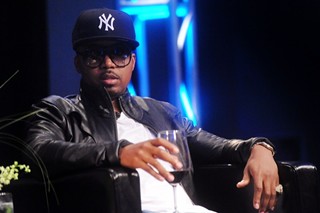 Nas at his 2012 SXSW Interview (by John Anderson)

It took Nas 15 years after the release of seminal 1993 debut Illmatic to show up in Austin, but he more than made up for the absence with a back-to-back bill one Sunday in August of 2008 that shook Emo’s to its core. He came back for a Damian Marley-assisted double dip of SXSW 2010 and the Austin City Limits Music Festival in 2011, taking part in a SXSW Interview the former year as well.

Last time the New York MC came through town was SXSW 2012, when he concocted a makeshift Queensbridge neighborhood out of fake buildings and green subway steps. He performed Illmatic that evening, with short breaks and DJ sequences and a few additional tracks tacked onto the end. ACL Live at the Moody Theater’s top-shelf sound system crystallized everything, be it Nas’ raps, DJ Premiere’s breaks, or the percussive bang throughout “One Time 4 Your Mind.”