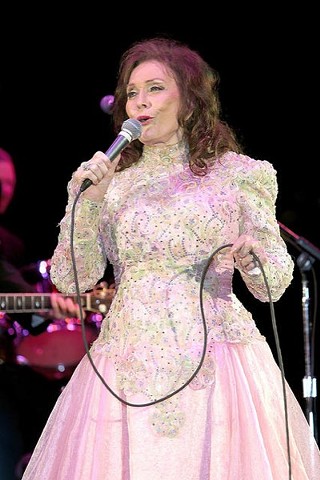 Loretta Lynn on the second day of Rodeo Austin, 3.2.14 (by Gary Miller)

In his final local appearance, George Jones, 79, subbed for a topmost 2011 Rodeo Austin headliner. Despite him having gone to pasture as a performer, it was quite the substitution. Loretta Lynn, 81, made good Sunday, and though the “Blue Kentucky Girl” continues playing well past retirement age, her voice remains a delight.

A tiny woman in a overflowing pink ball gown, Lynn climbed the round, moveable, and revolving stage in the middle of the Travis County Expo Center arena where bronc bustin’, calf ropin’, barrel racing, and bull riding had galvanized a full house on a frigid day when none of the carnival rides outside were in service.

As unsteady as she looked getting out of the soccer van that deposited her at the foot of the stairs, onstage she mostly kept to a couple spots while rifling through one two-minute Country & Western smash after another. After 25 minutes, when she sat down and let her seven-piece backing band run through a couple covers of Ray Price and the Eagles, she’d mowed down 10 tunes.

“Thank you. Thank you very much,” she said after the fourth one. “It’s raining like the dickens out there. Just look at my hair – but don’t you say a word.”

True, the first lady of country had lost a quarter of the house once the Rodeo portion of the evening was done, but the reverence and awe in the arctic arena remained palpable throughout the 50-minute set. Not only is Lynn’s voice still high and sweet, when she sang “You Ain’t Woman Enough to Take My Man,” you damn well believed her.

Her breath, intonation, and belief stood at the door of that song with a loaded shotgun. When she delivered the last word and note in Patsy Cline cover “She’s Got You,” heartbreak name’s was Loretta Lynn.

“We’ve been in Texas three days and that tickles me to death,” giggled the singer, later recounting that her earliest tours were to the Lone Star state, where she played for $50 a night. “I never forget Texas. I love Texas. It kept my family from starving.”

Certainly no one went hungry in the second day of Rodeo Austin (check the live stream), which this year strings together consecutive Sabbaths of superstars – Lynn, Willie Nelson & Family next weekend, and Dwight Yoakam closing out on the Sunday of South by Southwest Music. From her very first composition (“I’m a Honky Tonk Girl”) to her most famous (“Coal Miner’s Daughter”), Sunday’s belle of the ball sounded positively girlish.

Do women’s voices mature better than those of men? Loretta Lynn’s hasn’t aged at all.

Hey, Loretta!
Everything but the kitchen sink with Loretta Lynn