Sharon Jones isn’t the show. She’s just the brightest star in the Dap-Kings’ universe. The tiny fireball neither opened the group’s ACL Live at the Moody Theater performance last night nor closed it, but the 57-year-old Brooklyn soul queen sang, dance, and stomped for a full 90 minutes like a superhero. With talent like that, you put it on a pedestal.

In Austin for the first time since an eight-month bout with pancreatic cancer delayed the release of third album Give the People What They Want for longer than it took her and her Dap-Kings to make it, Jones worked within the fully comprehensive sequencing that’s become a Daptone staple.

West Tennessee siren Valerie June opened, sounding devilish and dainty with a nü-blues threepiece. She smiled and hit merch. The Dap-Kings emerged half an hour later.

They’re not the funkiest-looking bunch. Some even look downright nerdy. Guitarists Joe Crispiano and Binky Griptite don’t mesh. Bassist Bosco Mann’s suit jacket ran large. Wearing a simple business shirt and tie, percussionist Fernando Velez looked more like an accountant than a funk brother even if it was his birthday. No matter.

The Dap-Kings play like Booker T’s MGs – a revue from a hit factory. They welcomed their backup singers, the Dapettes, to showcase their own singles. First Saundra Williams grabbed the spotlight (“That’s the A-side from the Dapettes” new single,” Griptite preached), then Starr Duncan emerged from the back for her single, which approximated modern Motown.

“Available at the Daptone Super Soul Store out back,” pitched Griptite.

When Jones emerged 15 minutes later, she was dressed like that bright star: gold dress, gold earrings, shining scalp, and some small white heels that didn’t look easy to dance in. “Cancer got kicked in the ass!” yelled Griptite. Jones never looked so alive.

She swayed side to side to “Stranger to my Happiness,” “You’ll Be Lonely,” “Long Time, Wrong Time,” and 2010 b-side “If You Call.” She was all business through the Gladys Knight arrangement of “I Heard It Through the Grapevine” and “We Get Along,” breaking for nothing and stepping with muscle across the floor.

Jones didn’t mention her cancer until “Get Up and “Get Out,” but even then she sang about it. “I had to give the people what they want,” she howled. “And now I’m cancer free!”

She broke into “100 Days, 100 Nights” and chicken strut all over the place. She introduced the Booglaoo and Mashed Potatoes during “Retreat,” then broke into the Twist and the JB (“Slow Down, Love”). Two more songs and she was done, leaving the Dap-Kings on to finish off the crowd.

The same went down during the encore, one the crowd demanded. At one point, the cheers became so loud I got chastised for taking notes precluding my involvement. “This Land is your Land,” sang Sharon Jones, but the universe is all her. 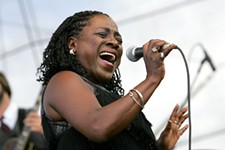 Sharon Jones: Give the People What They Want
Beating cancer, growing hair, and playing the Moody tonight

Humble Me
Sharon Jones sold out Austin, but she's nowhere near selling out.