Sharon Jones: Give the People What They Want 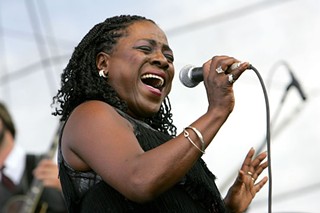 Sharon Jones in 2008 at Bonnaroo. (by Gary Miller)

Safe to say 2013 played out unlike any of Sharon Jones’ first 56 on this planet. Staring down album number six in May, the New York City soul queen walked into a doctor’s office one day and walked out a month later with a grim prognosis: stage two pancreatic cancer, an affliction that offers a mere 10% chance of survival.

Jones underwent chemotherapy and a full schedule of assorted treatments. On January 24, 235 days after going public with her sickness, she turned to Twitter to announce herself cancer free. By then, Give the People What They Want had already been out a week. Two weeks later, she left for her first post-cancer tour.

Sharon Jones & the Dap-Kings hit ACL Live at the Moody Theater tonight. We spoke with her a few nights into the tour.

Austin Chronicle: Sharon, how are you feeling?

Sharon Jones: I’m just so tired. I’ve been performing. I was in New York last Thursday, Washington D.C. two nights in a row. That’s what I’m tired from: I did two nights in a row. I did Monday night and Tuesday night. We left at 3am and drove here, and now I’m in North Carolina – in Durham. Thank God we got here last night because the snow is here, and the city’s shut down. Our show might get canceled tomorrow in Durham, and I hope it doesn’t happen. Day after tomorrow we’re supposed to be in Asheville.

AC: How has cancer affected your show?

SJ: I’m looking at my schedule. It’s like what I used to do over the last 10 years. People look at my schedule and say it’s so busy. Well, it’s been like that for the past 18 years. People just never noticed it. It’s only because I’m sick and they’re concerned about my energy. I was out of work for seven months, and I’ll be 58 years old in May. I’m not a young chickadee anymore. It takes a lot longer for me to heal than it used to.

AC: What are you doing to keep active when you’re not onstage?

SJ: Right now I can’t do anything but do these shows and rest during the day and on my days off. I hope that in another week or two I can get to the gym during my days off and get some more oxygen in my lungs. I want to get into some more stretching for my lower back.

I’ve been doing pretty good though. Thank God I’ve had plenty of energy. The people have not complained. Everyone who’s coming out has been amazed with my energy. Even I was amazed with my energy that first night. I’ve only been on the stage three nights so far. I’m talking to you after three nights, and I don’t feel as bad as I did over the weekend.

Give the People What They Want, but I’d imagine you’re giving yourself what you want, as well. You’re in your late 50s and facing down a 10% chance of survival.

SJ: Getting back out and getting on the road was definitely therapeutic. It was part of my healing process. I’m glad it worked. My fans, my last three shows have sold totally out. And I’ve had fans come up so I could sign autographs. Last night I said, “Come by the merch table. I’ll sign anything you want. I’ll even give you a hug and a kiss. Just come on by the merch table.” So many people got on that line and came by. I signed for a lot of them. Two of them, one said her mother was 58 when she died of pancreatic cancer. Another said her father.... They were telling me how much of an inspiration I’ve been getting out with this cancer and beating it.

AC: Was there ever a point where you felt pressure to test yourself either physically or mentally so that you could keep any semblance of a schedule?

SJ: Every schedule they planned for me. I was so skeptical and nervous about it. Thank god I have good management and an assistant here helping me out. Without this help it would have been bad on me.

AC: How much of the album was recorded and produced after you were diagnosed?

SJ: Everything was done before I was diagnosed. That’s so weird about this album. “Retreat!” and everything that I recorded in the studio.... That song was about telling this guy to get out. Then I had the cancer, and that song becomes me telling the cancer to retreat.

I was diagnosed in May. Around April, I was running to the doctor because I didn’t know what was going on. By the end of May, I was diagnosed with bile duct cancer. Eight days later, the doctors told me I had pancreatic cancer, stage two. It was pretty scary, and I really didn’t think I was going to be performing this album. I thought people would just buy it. I really thought that I was going to die.

From June to September, I didn’t sing. All those shows, those Fallons and Conans and Ellens, they all prepared me for the road tours. I wasn’t singing much, but they helped me get my nerves and my courage to get out there. I had to get past the effects of the chemo and the way my nails would look. My nails and everything turned black on my feet. You could see it in my skin across my face, and the hair. I had to wear shoes to cover my feet so people wouldn’t look at it.

Then I thought, ‘You know what, I’m just going to go with what I got.’ I chose to come back out and work with my fans so that they could see the effects as well. Now they watch my hair grow as I watch it grow.

AC: Aside from the lengthy break, what about this album’s production differed from previous efforts?

SJ: Nothing. Only thing is it took me two years to get everything together. At the time, I was dealing with my mother dying. She died of cancer. Neal [Sugarman, saxophone], his brother died of cancer. In the back, we dedicate this album to my mother and his brother. Only thing different that was done with the making of this album is the band got together and I didn’t get with them until two weeks later because I had to settle some things with my mother. By the time I got there they had the rhythm section down. In two weeks, those guys had 22 songs musically ready.

AC: What does artistic growth mean to a 57-year-old woman singing for a genre that harks back so many decades?

SJ: It means hanging with something and doing what you’re doing. You’ve got to do it over and over again. People want change real fast. This is what I do. We hung in there and stuck to our soul music. We keep our record label on track. I think we’re just growing. It freaks me out to realize that people call me an icon of soul music today. That’s amazing. I’m making a history here. The American Museum of History has an exhibit of me in their museum. Years from now, people are going to be reading about me and my band and the music that we’re doing. This is amazing. If that’s growing, it’s important that we’re growing. 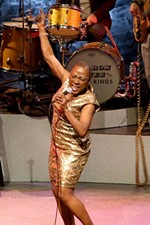 Humble Me
Sharon Jones sold out Austin, but she's nowhere near selling out.