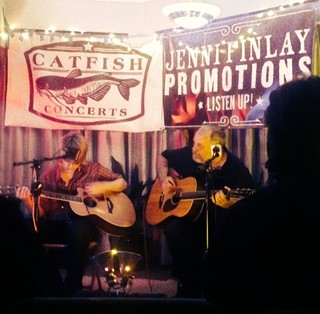 Yours truly on the left, with my father Jon Dee Graham, at the Folk Alliance International conference, Feb. 19-23, 2014. (by Gretchen Harries Graham)

Last Friday, I packed my Taylor guitar into Brent Grulke’s old, mint-green Carlton case, given to my dad, Jon Dee Graham, a few days before by Grulke’s widow Kristen. I rubbed my tired eyes, and boarded the 7am flight to Dallas, which Darden Smith was on. On the connecting flight from Dallas to Kansas City, we picked up Patrice Pike and Andrew Pressman.

All of us were headed to Missouri for the Folk Alliance International conference, which my dad joked had “too many songwriters for one hotel to hold.” I was the youngest artist accepted to FAI this year, and after getting confirmation, I asked my dad to come with me so we could play together as a duo.

The main thing about FAI is getting the hang of the hang. Graham Nash provided the keynote speech, Al Gore gave a talk Saturday afternoon, and a lot of late nights happened before, during, and after. Showcases are nightly, 6-10pm in hotel conference rooms, after which the unofficial gigs can go until dawn. That explains a certain glazed yet content look that most everyone seems to have on their face.

On the seventh floor of the Westin Crown Center was Jenni Finlay’s Catfish Concerts room. At the end of the hallway, the Wine and Nut room came hosted by Will Sexton and Amy LaVere. Those two suites were cornerstones for many an FAI attendee. Also popular were Austin agent Laura Thomas’ room, Combo Plate Booking, and Steve Poltz and Andrew Pressman’s joint music room. Poltz might as well have been the homecoming king at FAI, his performances the kind you wouldn’t want to follow.

Hallways at the hotel were plastered with showcase posters and signs that read things like, “Please use your non-club voice levels in the halls (acoustic music is surrounding you).” One sign that was everywhere had local singer-songwriter Matt the Electrician’s photo and read, “Only YOU can prevent Folk Funk. Don’t forget to wash your hands during Folk Alliance.” Matt definitely has the FAI hang down.

Equally memorably was playing Christine Lavin’s Concert Window show. I was invited to play the online show site by its owner Dan Guerney, who’d seen me sneak a song into one of my dad’s recent web concerts. The concert raised over $1,200 for the Folk Alliance Scholarship Fund. I was honored to be part of it.

Jenni Finlay’s room was a haven in our off music moments. Matt the Electrician was the guru FAI guide for us. There’s a lot of standing around in hallways, doorways, and rooms listening to some the best acoustic music in the world. New Austin local by way of New York, Anthony de la Costa, went outside the box and played with a band to the FAI crowd. Music would break out spontaneously. I’d be sitting on the couch in the hotel lobby and all of the sudden fiddles would start playing and you’d look up and see someone like songwriter J. Wagner cutting the rug.

I think I finally got the hang of it by the time it was time to leave. I’ll be back next year if they’ll have me. Joan Kornblith from the Board of Directors said, “I talked with a few first-timers and was so happy to hear them say, ‘I know you said I’d get a lot out of it, but I had no idea it was like this!’ There’s just no way to explain to someone what it’s like when 2,000-plus music people take over a hotel and start putting on shows in every hallway and stairwell.”

What local Austin musicians I ran into at Folk Alliance International had to say:

Elizabeth McQueen I felt very opened up by the experience. There was so much music and so many musicians all in one place that it triggered a part of me I didn’t know was dormant – that wide-eyed girl who was in love with music and people who played music.

Patrice Pike Folk Alliance has the great mix of bringing everyone together for both business and music in this amazing community of singer-songwriters. FAI is unique because it isn’t overly corporatized or focused on profit, and yet rises to its ability to be sustainable. I love it and I feel at home.

Andrew Pressman I love it. I get to jam with so many friends and strangers all at once. I am continually blown away every year. Occasionally, I get a gig.

Owen Temple The Folk Alliance conference is a movable feast, a pop-up circus, a flash mob, a week-long acoustic guitar-strumming city. It’s an annual family reunion for people who love and live thinking about songs. I go to be terrified by crowds, inspired by my friends, and reassured about the present and future state of roots music.