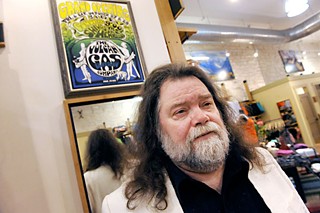 By Friday afternoon, the grey, ponytailed segment of Austin’s music community was up in arms over news that a new Sixth Street club with an electronic dance music focus had been christened the Vulcan Gas Company, named after one of Austin’s historical venues.

The original Vulcan Gas Company, revered as an early incubator of psychedelic rock, opened in 1967 at 316 Congress, which today houses a Patagonia outdoor apparel shop that has had occasional music in-stores. Homebase to regional favorites like the 13th Floor Elevators and Shiva’s Headband, it also hosted untouchable Sixties archangels like Moby Grape and the Velvet Underground.

Since shuttering in 1970, the Vulcan’s become a venue of local lore, living on through highly collectable concert posters from artists like Jim Franklin and Gilbert Shelton. How exactly does a new business score a name with such cultural cachet?

“Legally, we didn’t have to purchase any rights,” explains Susan Espinoza, who co-owns the club with Jay Manickam, Ryan Nacol, and Marc Piatkowski. “We have the trademark in the category of restaurant and/or bars and [the original Vulcan owners] have the trademark for posters and art.”

The new owners contend there’s no treachery involved in scooping up the dormant Vulcan Gas Company club trademark. Espinoza says that original Vulcan co-owner Don Hyde gave them his blessing and that during the planning phase of the new venue, Espinoza was in frequent communication with Don’s son Sam Hyde, a New York DJ.

The 2014 Vulcan Gas Company, located in the long vacant property at 418 E. Sixth, near the intersection of Sixth and Neches, opens March 11 as an official South by Southwest venue. During the Music fest, they’ll host reunited New Wave act Spandau Ballet. They expect to open full time in April, concentrating on DJs and EDM music in the roomy, 600-capacity space.

Espinoza and her fellow owners believe there’s a gap in the local EDM market they can fill. That scene’s emerging internationally, as it is here in Austin, where long lines for DJ- and producer-headlined shows at Empire Control Room are becoming the norm. The new Vulcans see connections between Sixties psychedelic rock and modern EDM.

“At music festivals, you’ll notice that the EDM performances stand out as a bigger experience with lights and lasers and bass you can feel,” notes Piatkowski. “There’s a parallel in the live performance of the genres.”

“We can’t recreate the Sixties, but we can create a music venue that serves the cutting edge music of today,” adds Nacol, who says he and his partners are conscious of the Vulcan name’s heritage. “We’ve given it a lot of thought and wanted to be respectful to the history from day one.”

They plan to purchase some classic Vulcan posters from Franklin to decorate the club and are considering naming drinks after the VGC founders. Even then, expect grumbling from the old-timers. The folks who keep alive vintage Vulcan acts like Bubble Puppy don’t likely care about a DJ and would never make the trip down to Sixth Street on a Saturday even if the ghost of Freddie King was performing.

College kids wanting to shake their junk to modern music will love it, however, without knowing or caring about the name. Should they?

Keeping alive a dead club’s brand is nothing new in Austin. The cultural disconnect between the old and new Emo’s and the ongoing saga of Antone’s has made it clear that the local venue marketplace has an unhealthy reliance on nostalgia. That annoys me as much as it does anyone who prefers innovation over history.

Fortunately, change is something everyone has to accept and, here, more than anywhere, a name is just a name.