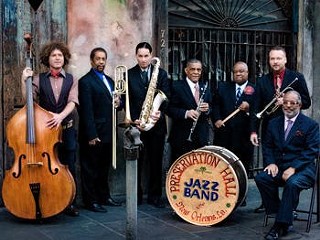 The mother of all New Orleans’ brass tacks, the Preservation Hall Jazz Band, celebrated its half-century anniversary in 2011. My first show ever was within that first decade – when I was about halfway through my own first decade. Forty years on, they’re touring one of their best LPs, 2013’s That’s It!, on display Friday at the Paramount Theatre.

Austin Chronicle: My wife and I caught PHJB at the Montreal Jazz Fest last year. Everyone knows of the pop festival circuit – Coachella, SXSW, Bonnaroo – but how are jazz festivals in this new millennium? Is that a circuit for y’all?

[Bandleader] Ben Jaffe: The world is our circuit! But seriously, I don’t know of any other band that crosses over into so many different musical communities. One day you may catch us performing a ballet at a performing arts theater, the next we’re in Montreal or Montreaux or Newport. It’s truly a testament to the universal message/appeal of what we do. We don’t change what we do when we play, whether it’s Bonnaroo or Carnegie Hall or Preservation Hall in New Orleans.

AC: There wouldn’t happen to be records of all the PHJB shows over the decades would there? I believe my first show was PHJB at the band shell in San Francisco’s Golden Gate Park in 1970 or so. I was 5 that year.

BJ: That was Stern Grove!! That’s one of my favorite venues. My dad was the tuba player with the band at that time. I was born in 1971 and spent every summer in the Bay Area. Stern Grove was an annual show for the band every Fourth of July weekend. Stern Grove, Marin County Fair, Mondavi Winery, and Frost Amphitheater: they were a tradition. As far as recordings go, the band didn’t record the shows, but there were people recording the shows from the audience.

AC: I thought the new album was a knock-out. It sounds both incredibly contemporary and classic at the same time. What were the various pieces that came together to make That’s It! as good as it is?

BJ: Jim James has been incredibly supportive of our evolution. He was, and is, a big part of the band’s post-Katrina evolution. We celebrated our 50th anniversary in 2011. I spent years working on projects built around it. The anniversary became more than a celebration of our past. It also became a celebration of our future. The Preservation Hall Band has a responsibility to not only carry on the traditions, musical and cultural, that were handed down to us by the generations that came before, we also have a responsibility to contribute our voice and experiences to the New Orleans musical tradition.

AC: I’m behind in my viewing, but were y’all ever on Treme and if no, why the heck not?

BJ: Yes! You'll catch us in season two. Matter of fact, the very first episode has a scene with Trombone Shorty and [actor] Wendell Pierce outside Preservation Hall. Our trombonist, Freddie Lonzo, is often referenced by Wendell Pierce as being the baddest cat in town. Eventually, Wendell and his family along with a group of his students attend a session at Preservation Hall. The year would have been 2007 or 2008. Those were sad times for us. The Hall was generally empty. We were still in the midst of rebuilding our lives and our city. The Hall was practically empty until 2010.

AC: What state do you consider New Orleans in today?

BJ: One of the bitter pills we’ve all had to digest is: New Orleans is in a great place and a lot of that has to do with the rebuilding efforts and support we received after the Hurricane. There is more music in New Orleans today than I can ever remember. There are more young brass bands and children playing jazz than when I was young. It’s inspiring and inspired. I’m honored to be a part of the process.

AC: Any PHJB ties to Austin? We’re not a particularly enthusiastic jazz city, but we love NOLA sounds. Got history here?

BJ: The PHJB has appeared at ACL Fest on several occasions, SXSW, the Long Center, and the Paramount. We actually debuted a Danny Clinch film shot at Preservation Hall with My Morning Jacktet entitled Louisiana Fairytale during the SXSW Film festival. So yes, there’s history. We love Austin. It’s laid back, good food, good people.... A friend invited me to watch a Saints game at a bar. When I got there, everyone had a Saints shirt on. There was a Saints car on the roof? [Ed note: That would of course be the Shoal Creek Saloon at Ninth and Lamar.]

AC: Ray Charles made the connection between jazz and country explicit. Ever recorded with Willie Nelson? Where does PHJB and country music intersect?

BJ: We’re all huge Willie Nelson fans. We have lots in common, but have never met! I’m not a ethnomusicologist, so I don’t know the history of country music. What I do know is that country songs and musicians are connected to their community. When we played the Grand Ole Opry, it was like being backstage at Jazz Fest. Everyone knew everyone else. This guy went to school with that guy’s sister. This one’s uncle is that one’s cousin. His father played with that one’s grandfather....

That’s a lot like New Orleans. Music is a family/community tradition here. Music in New Orleans is a social affair. When I listen to Johnny Cash or Jimmie Rodgers or any of the Bakersfield musicians, they sound like their singing the blues. 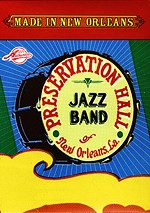