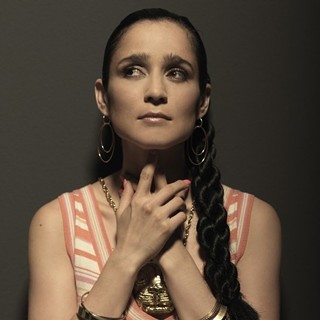 Coup: “A brilliant, sudden, and usually highly successful stroke or act.” The Pachanga Latino Music Festival, eschewing its multi-day format in returning to idyllic Fiesta Gardens on Saturday, May 10, scored all right. In Mexican-American pop princess Julieta Venegas, the 7th annual convergence lands one of its truest coups.

Best Coast’s Bethany Cosentino might be the best Anglo parallel to Venegas, who shares the same Midas touch for infallible rock hooks over pan dulce choruses. Better still, her explorations of the heart, while always toe-tapping and shot-inducing, run deeper emotionally – closer to Cat Power, but without the boozy melodrama.

Born in Long Beach, Calif., and raised in Tijuana with a twin sister, the 43-year-old beauty debuted in Latin America and Europe in 1997 with Acqui, produced by the Academy Award-winning Gustavo Santaolalla (scores for Brokeback Mountain and Babel), collaborator for top-tier Mexican acts including Café Tacuba, Juanes, and Molotov. From that point, it was on.

The singer’s no stranger to Austin either, visiting some half-dozen times since the start of her career, but can the last time through town really be ACL 2003? I vaguely recall an indoor Stubb’s gig for Limón y Sal, but a lot of tequila’s passed under my bridge since then, so I’d have to comb through years of show logs to confirm that. Whatever the case, it’s been far too long since Venegas pulled her Cinderella act here (now you see her, now you don’t), so Pachanga playing suitor makes for a handsome coupling.

Longtime Austin touristas, El Gran Silencio best their fellow headliner in absence-makes-the-heart-grow-fonder status via a dearth of local appearances past the release of Chúntaros Radio Poder.

Pachanga perennials La Santa Cecilia, who scored their own coup by nabbing an American Grammy last month for Treinta Días in the Best Latin Rock, Urban or Alternative Album category, arrive surfing a huge high in being a micro DIY pop act garnering such a prize. Gaby Moreno, another Pachanga quick dial, returns with her own Grammy from across the border.

Let the ramp up to Pachanga – “party, bash” (again according to Merriam-Webster) – begin.