A ‘Blue Blue Day’ for the Nashville siren tonight on SoCo 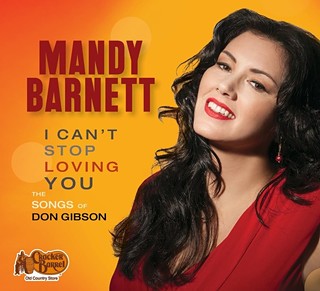 When people start talking about Mandy Barnett, eventually the word “amazing” gets used. The Nashville-based singer with a deep country style plays the Continental Club tonight and it’s your shot at finding out what that word really means.

Barnett’s been around long enough to have played the title role in the stage musical Always, Patsy Cline for 20 years. I was then surprised to discover she’s still under 40. A singer from a very young age, she was on major labels early in her career, one highlight being 1999’s I’ve Got A Right to Cry for Seymour Stein’s Sire Records. Despite her obvious talent, country radio wasn’t interested.

“I tried to go for it in the Nineties, and for whatever reason it didn’t really work out,” she offers. “I didn’t try that hard after that. Wherever it was going, wherever radio is heading, I don’t feel I fit into that so I stopped trying. It’s been really important for me to maintain artistic integrity in doing traditional country music.

“I’m not a singer-songwriter. I don’t have a wealth of new material to draw from, so I’ve gone the classic route. And I’m really happy that I’ve done that. I’m really satisfied with the recordings I’ve made. In the pop world, there’s a place for someone like Michael Bublé, but in country there’s not that place.”

Barnett’s most recent album fortifies her stance as a traditionalist. A tribute to one of country music’s songwriting heroes of the Fifties and Sixties, I Can’t Stop Loving You: The Songs of Don Gibson reworks Gibson-penned tunes like the Ray Charles’ title track and “Sweet Dreams,” which Patsy Cline made her own. The oft-covered “Oh Lonesome Me” is included as well as some of the subject’s own hits, “Blue Blue Day” and “Just One Time.”

Barnett and Gibson became close friends before his death in 2003 and it was it his idea that she record an album of his songs.

“I struggled for a few years. It took me 10 years after he died, but I finally got it together. When you want to do a Don Gibson tribute record, nobody cares. It’s was hard to find any money.

“So me and my manager put our money together and said to heck with it – we’re gonna do it. We’re gonna get it out of our systems and we’ll figure out what to do with it later. It’s easier to make it and then play it for people than talking about it.”

To sweeten the deal, Country Music Hall of Fame members Harold Bradley, Hargus “Pig” Robbins, and Charlie McCoy, who played on some of Gibson’s original recordings of these songs, are part of the band she used on the album.

“That’s another thing,” she adds. “I wanted to do it while Harold and Pig and those guys were still alive and playing great.”

Barnett doesn’t get to Austin often. She claims the last time she was here was for a gig on Sixth Street, of all places. I remember seeing her play at Central Market around the time of I’ve Got A Right to Cry.

Which isn’t to say she doesn’t fit right into the country scene around here. Part of her band tonight will be members of Heybale! Over the years, she’s also appeared on discs by locals including Jessie Dayton, Rosie Flores, Don Walser, and Ray Price. Last summer she performed with Asleep at the Wheel in Greenville.

“It’s always been important to me to do great songs and great material no matter what. The music coming out of Nashville now doesn’t even resemble country music. People are rapping. I really had to go with my own dream of the mainstream.”