Russian punks give as good as they get as Olympics begin 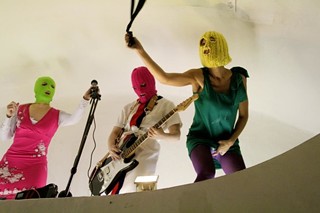 As the Olympic torch reaches Sochi amid protests of anti-gay legislation, two recently freed members of Russian punk group Pussy Riot made the press rounds. Nadya Tolokonnikova and Masha Alyokhina matched their host’s quick wit Tuesday while addressing the elephant in the Olympic arena on The Colbert Report.

Tolokonnikova and Alyohkina, speaking through a translator, stated their release was part of a failed PR scheme on the part of Russian president Vladimir Putin to promote the Sochi games, which start today. While the world gears up for the one month out of every four years that people care about curling (or not), it was a refreshing and frank address on Russia’s anti-gay propaganda policies and a critique on who they snottily referred to as “Putin the Great.”

The two musicians were jailed in March 2012 on charges of “hooliganism motivated by religious hatred” after filming a music video for “Punk Prayer – Mother of God, Chase Putin Away!” in Moscow’s Cathedral of Christ the Savior. They boiled the incident down to Colbert as “we sang a fun song in a church.” While the host drifted between hardball and his signature camp (“Have you been to an Olive Garden?”), the duo volleyed both the political and hilarious.

When asked what they had against Putin, the ladies responded: “We have different ideas about a bright future, and we don’t want shirtless men on a horse leading us into them,” referring to a 2009 photo of Putin riding bare-chested through the mountains, not unlike the Marlboro Man.

Colbert gave the pair a chance to thank Putin on camera for releasing them, but the women refused with a laugh.

“We’d much rather thank the people who have nothing to do with Putin who supported us,” Tolokonnikova said, also suggesting that since their release hadn’t aided Russia’s PR nightmare, perhaps Putin had made a mistake and should have thrown them back in jail.

They ended the program by making Colbert an honorary Pussy Riot member, even though he struggled through the name in the beginning of the interview. When he asked why the band’s name is in English, the pair offered, “We wanted to let English speaking people enjoy themselves.”

It was top-notch television, watching them stun the constantly even-keeled Colbert with their rapid-fire responses. While newscasters may struggle with the name, these badass ladies made me want to shout it from the rooftops.

Pussy Riot
Playing tonight? Watch what you sing in Morocco!