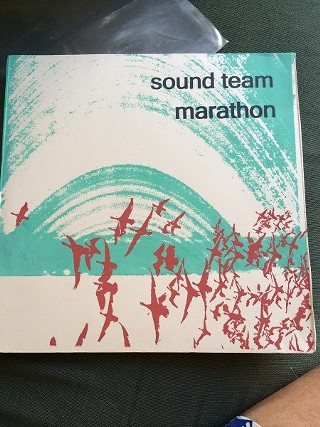 Those who’ve never heard of Sound Team know not the tale of the band that got thrown out. The local sixpiece, formed in 2000 by Bill Baird and Matt Oliver, thought it hit the big time six years later when it signed with Capitol Records only to disband in 2007. Strife with the major label over that year’s Movie Monster blew the whole thing up.

Today, many years down the line, their fate’s resigned to bittersweet memories, recognition as the band whose album got priced at $18.98, and a woeful Pitchfork review for Movie Monster, but Baird maintains there’s a definitive Sound Team recording worth hearing/revisiting, one combining the band’s early attraction to lo-fi studio experimentation with a live muscle that gelled in 2002.

That sound manifested itself best on 2005’s Marathon, a long-player the locals released on St. Ives Records, a vinyl-only branch of indie favorite Secretly Canadian. Only 300 copies were pressed, so it largely got lost amidst the mid-Aughts’ swing towards blogs and mp3s, but a recent email from short-term Sound Teamer Will Patterson encouraged Baird to revisit the album and ultimately re-release it on Bandcamp, where he hosts much of his robust catalog.

“It was really intense,” Baird writes of that first listen from Oakland, Calif., where he moved a year-and-a-half ago to record music, write operas and movie scores, and work as an archivist at the Center for Contemporary Music at Mills College. “It all came flooding back… and I remembered how great everything sounded before the music industry got involved; before misguided producers took those tracks, dumped them into a computer, and started shuffling stuff around, second guessing things, over-correcting, over-compressing... just various things that can actually destroy a recording’s magic while trying ostensibly improving things. The tragedy of unintended consequences”

That tragedy can be heard on Work, a five-song EP that remodeled Marathon stunners “The Fastest Man Alive,” “Orange Bird,” “In the Dark No One Can Hear You Sweat,” and “Don’t Turn Away.” The EP’s streaming on Rhapsody right now if you’re signed up. And Work’s the right name for it: the EP certainly did.

Back on Marathon, Sound Team’s experimentalism gets captured through the affordance of full freedom. It’s weird, “Your Eyes Are Liars” evoking memories of the band’s earliest CD-Rs as well as Baird’s recordings under Sunset, and also wildly unhinged. “The Fastest Man Alive” and “Orange Bird” find Oliver flying off the handle both vocally and through his soupy Stratocaster. Elsewhere, “Shattered Glass” hints at distorted Eighties prog rock, while “Back in Town and “In the Dark No One Can Hear You Sweat” reach pop idealism in the same vein as Spoon’s Girls Can Tell.

“We didn’t realize that record would be our peak, creatively and just the spirit within the band,” Baird writes. “The next two years in the band would be spent chasing after that magic.”