In his South Austin backyard, Biram and I, friends from touring together, discussed God, music, and maturity. We scrutinized his writing and recording process, considered his new tattoo, and imagined what heaven might be like.

Austin Chronicle: Advances of your new album turned up on Ebay a month before it came out.

Scott H. Biram: Was that you trying to sell ‘em?

AC: No, but I wonder if it gives you a sense that you’re becoming more popular?

SHB: No, it gave me a sense that people in the press business are shitbirds trying to make an extra buck on Ebay with music they don’t give a shit about. I guess it makes me feel good at least that someone is trying to sell it.

AC: Does Nothin’ But Blood refer to your truck accident?

SHB: No, we’re finished with the truck accident shit. It gave me a legend, but people focused on it too much. All the articles say, “Scott H. Biram survived a head-on collision with a big rig... He’s also a musician.” I have to say, it did a lot for my career. I don’t recommend it though. It hurts like a mutherfucker. Nothin’ But Blood is a good name for a really heavy album, which this didn’t turn out to be, so now it’s just a confusing title and I like that.

AC: Is your contrasting sin and gospel a form of repentance?

SHB: Well, the sin is cut and dry, but the gospel stuff is complicated. It’s about rejoicing and the uplifting feeling of the music, not preaching about God or what they taught me in church, because my spiritualism is something I make my own guidelines about. I heard “When I Die” in my head at 5am and just wrote it down. I felt like my grandmother, who passed away, gave me that song.

AC: You typically record at home, so working with producer Erik Wofford at Cacophony Records was a new approach for you.

SHB: I thought I could just go in and get it done and it would be badass, but it was more work than I was expecting. We got a lot of good songs, but on some of them we butted heads. The month between recording and mixing, I went into my home studio and re-recorded some of the songs on my new reel-to-reel, then Erik did a good job mixing it all down.

AC: Are you a one-man-band because you’re difficult to work with?

SHB: I have a vision of how I want things to be. When it goes away from that, it really takes a lot of patience for me to let go because I’m also a control freak, which is basically the same thing as a visionary. Both on the road and in the studio, it’s more practical for me to work alone. I don’t have to split money at shows and, when I’m recording, I can experiment as much as I want and not feel like I’m stepping on someone else’s toes or running out of time.

AC: Could you see yourself working with a big time producer?

SHB: I’d love to do an album with Rick Rubin or T Bone Burnett. I feel like it would end up being more of an acoustic folk album if I worked with either of those guys.

AC: When did you start recording music?

SHB: I got my first four-track when I was 14. I knew my mom had gotten it for me for Christmas, because I saw it with her name on it at the music store. Then I found it in the closet at our house and recorded a song on it before Christmas while she was at work, then put it back in the closet. For 26 years, I’ve been trying to learn to be a good engineer and sometimes people praise me for my dirty lo-fi sound, but really it’s me trying to learn to produce.

AC: There are some unbelievable music changes in “Around the Bend.” What’s going on in that song?

SHB: I was trying to make it sound like a hillbilly on a porch saying “Pass the moonshine” and drinking that and smoking a big reefer and his mind is blown. That’s why it starts off as a podunk Appalachian kind of thing, then turns into some crazy metal, and then he comes down from it at the end.

AC: There are no trucker songs on the new album. Are you not speaking for that demographic anymore?

SHB: No, I just didn’t get around to recording a truckin’ song on this album. Metal songs and truckin’ songs are my two favorite kinds of songs to play.

AC: Who are the metal bands that you like to cover?

SHB: Slayer and old Metallica. Underline the old because the new shit sucks. James Hetfield wipes “back to the front.”

AC: “Slow & Easy” is an interesting song. When you say, “No more peaceful than I was when I was wild,” it sounds like you’re contemplating maturity. Why are you laughing?

SHB: Because that song was a bitch to write.

AC: Because you were contemplating your maturity?

SHB: I was contemplating my own suicide! Just kidding. No, man, it was one of those song where I said, “I need to write some more songs.” It was one of those contrived kind of things, where a lot of my best songs come to me really quickly and I don’t’ have to change much. This one I wrote a verse and then a chorus and then another verse and I played it on stage a couple times and it was boring. I added a bridge to break it up. Then I recorded it and it scared the shit out of me, because it was one of my least favorite songs to play onstage. I couldn’t get it to feel comfortable. Then I realized that with production it was the best acoustic song on the record.

SHB: That’s just a memory I have from when I was 10 years old. It’s stuck with me, so I figured I had to put it in a song. It’s also similar to other topics that I go over a lot like struggling to be alive and depression. I say “tangled up in this mess of weeds and vines” because sometimes it feels like I’m getting strangled by life. I’ve been trying to get my shit together for a while and not be a drunk ass – poppin’ people in the face and whipping my dick out.

AC: Or spreading your ass cheeks onstage and screaming, “Look inside me!”

AC: How did you come to add the words “No Regrets” above your chicken leg tattoo? What is it symbolic of?

SHB: So the chicken leg tattoo is there because this piece of meat sticks out of my arm where my bone came out after the accident and it looks like a piece of chicken fat. I kind of regretted getting this tattoo because people are always like, “Is that a chicken leg on your arm?” When I’m eating buffalo wings in a restaurant I feel embarrassed because people think I’m really into chicken wings or something. I just kind of regretted it, so I got “No Regrets” as a joke. Also the chicken leg is kind of shaped like a bowling pin so someday I’ll get a bowling pin on the other arm that says “Yes Regrets.”

AC: What’s the purpose of playing music for you?

SHB: I have to do it. There’s no doubt about that. I write songs equally for me and the listener. It’s a form a therapy, getting things off my chest. Then, unfortunately, when you make music your career you can get sidetracked really easily with what’s required of you instead of being driven by inspiration. I don’t have much time to do things I want to do like camping and cooking. When I’m home, I cook five nights a week and I tweak cookbook recipes.

SHB: I’ve been diggin’ on my beef tips lately and I’m addicted to Brussels sprouts.

SHB: [Cheatham Street Warehouse owner] Kent Finlay told me to write songs first thing in the morning so you’re still connected to that dream state and don’t have any other stimulus. This guy named Unka Will told me, “Do at least one thing for your music ever day.” I took that to heart and now I do 100 things for my music every day and it’s killing me because I can’t stop.

AC: What’s heaven to you?

SHB: A place where my anxieties are low, my body doesn’t hurt and instead feels energized, great food and drink at hand, my good friends and family all around and in harmony, good weather, and a good view. 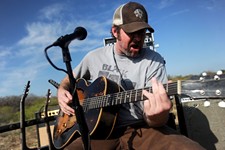 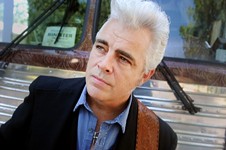