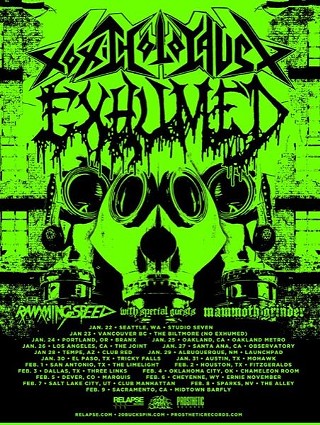 The San Jose foursome takes a lot of inspiration from British death metal figureheads Carcass, who load into Mohawk themselves after SXSW, March 22. Both bands started out as gore-obsessed grindcore outfits that grew more melodic and political without losing their perversity. Both also experienced periods of inactivity and came back stronger, though Exhumed’s five-year layoff (2005-2010) lasted half as long as that of Carcass (1996-2007).

In fact, Exhumed are one of the few acts that took to heart the lessons of Accept and Scorpions – that memorable riffs take precedence above all else – and infused them into death metal. Necrocracy (Relapse), Exhumed’s fifth LP not counting its 2005 covers disc, sees the band seasoning its tales of butchery with dystopian politics. The songwriting got even tighter, but the sound hasn’t softened at all.

While Carcass has shed most of its hardcore origins, those roots still show in Exhumed’s matted hair. A split with Municipal Waste side project Iron Reagan, released earlier this month on Tankcrimes, features covers of Negative Approach’s “Ready to Fight” and Minor Threat’s “Seeing Red.” Both are classics in their own right, and when played through Exhumed’s unwashed fingers, there’s an element of joy not seen in much death metal.

Austin Chronicle: Your show in December 2012 at Red 7 was brought on by a tour van malfunction that left you stuck in Alabama. Did the shows you booked following that, of which the Red 7 show was one, have a different sort of energy? And how did you survive with a broken van in Alabama?

Matt Harvey: We basically hung out in a Red Roof Inn for a week and sat on the Internet and watched TV. Luckily the weather wasn’t too bad, even in December. We just bought a bunch of groceries and holed up. It was a pretty boring week, to be honest.

The shows were really cool and fun that we did on the way home. They had a way more DIY vibe and we just played whatever we felt like, old stuff, new stuff, rare stuff, weird stuff, whatever. The last gig we did in San Diego was really fucking fun and a great way to end 2012. We did a lot of DIY type gigs at the end of the year, since first we didn’t get into Canada and booked last-minute shows in Ohio, Buffalo, Denver, Cheyenne, Salt Lake City, a bunch of places. Then we did it again in Lafayette, Houston, Austin, Midland, Las Vegas, San Diego....

That actually inspired us to do a short, week-long “B market” tour in California, hitting a lot of places that bands don’t usually go – Lancaster, Ventura, San Luis Obispo, Modesto, etc. – and it was really fun. I like playing everywhere and I take pride in the fact that we play places other bands just don’t. It’s something weird and special for the fans and something different for us rather than being in L.A. for the one millionth time (like I am as I type this).

AC: Exhumed’s trajectory is a lot like that of Carcass – starting off as gore-grind before becoming more melodic. Does that mean there will eventually be a “cuntry” spinoff, Matt Harvey und Die Fluffers?

MH: Haha! I don’t see that one happening. Our guitarist Bud Burke has been playing in a country band for years, though, and plays pedal steel guitar and banjo and does chicken pickin’ and all that shit. It’s really cool. He’s more of a Merle Haggard/Buck Owens kind of guy. We do all enjoy that classic country stuff, Willie [Nelson], David Allan Coe, the Highwaymen, Johnny Paycheck, Johnny Cash, Roger Miller. Bud’s turned me onto some cool stuff, as has our European booking agent, Luuk. Lots of good old-timey redneck music out there.

AC: Necrocracy brings back Bud Burke, who played on Anatomy is Destiny and Exhumed’s material from the early Aughts. What led to him coming back into the fold? What chemistry do you have with him?

MH: Well, I’ve known Bud since like ‘95 or so, so we’re good friends and get along really well. He’s always been an excellent guitar player. In fact, sitting and jamming with him on the Slaughtercult tours helped my playing improve for the Anatomy record. A good chunk of that musical development is directly attributable to him.

As far as him coming back, things were just heading south with our old guitar player Wes [Caley]. He’s a great guitar player and riff writer, but we just weren’t getting along. I had played with Bud in a thrash band called Scarecrow for a while, and I always thought we made a really good tandem guitar team, with me being the Dave Mustaine to his Marty Friedman or whatever, and I knew he was the guy for the job.

In between tours or after blowouts on the road with Wes, I’d called him a couple of times before finally getting him to sign on for the Summer Slaughter tour. After the first rehearsal, it became clear that he was the guy that should have been there all along and it felt like the most natural line-up we’ve ever had. No disrespect to the guys I’ve played with in the past, but this is definitely the band’s strongest line-up, musically and in terms of camaraderie and just being a solid unit.

It’s such a great feeling to know that you’re surrounded by friends who have your back, musically and otherwise when you’re out on the road. We have a blast getting drunk and being idiots day in and day out and never really seem to have any real arguments or anything. We’re pretty fucking lucky in that respect.

AC: Lyrically, Necrocracy mixes Exhumed’s penchant for horror and gore with a bleak sociopolitical outlook, especially in the title cut and lead-off track “Coins Upon the Eyes.” What led to this direction? Do you see the band using more lyrics like that on future albums?

MH: Well, there have always been songs like that here and there, but this time we really let it be known a lot more. Anatomy kind of centered around existential concepts, whereas Necrocracy is more political. There have been songs about consumerism, television culture, relationships, and lots of other shit throughout the early records, but this one was a lot more blatant and obvious.

I felt like before I was being so cryptic that people weren’t even aware that anything was going on behind the obvious hack and slash stuff. Of course, even the new record has songs like “Carrion Call,” which is just about coming to a show and rocking out, and “Sickened,” which is an old-school death metal type thing a la “Ridden With Disease” by Autopsy or “Chronic Infection” by Pestilence.

I’ve always been somewhat into politics, ever since I was 12 reading 1984 and listening to ...And Justice For All. I also used to work at Alternative Tentacles, so I have a passing knowledge of your Howard Zinns and Noam Chomskys. While we were putting the record together, I had the title Necrocracy, which I thought was just an exceedingly clever term that I nicked from Christopher Hitchens’ God Is Not Great book, and it just kind of became the centerpiece of the album concept.

I kind of went a little overboard in ’12, reading The Economist and The Atlantic and watching The Daily Show every day, brushing up on The Zinn Reader and shit. Reading the liner notes to the record now, I’m a little put off by how political I was getting, haha! But it’s definitely a snapshot of that moment, which is what an album is supposed to be.

I’m sure we’ll continue to do stuff like this, but we’re looking at stuff other than politics in the immediate future. I’ve even thought about doing a true concept album with a story and characters, but I’m not sure if it’s too cartoonish or just too pompous an idea. We’re just taking baby steps towards writing new stuff now, so we’ll see what makes sense.

AC: You just released a split with Iron Reagan on Tankcrimes Records. What led to y’all wanting to release a split together?

MH: Well, we toured with Waste and were friends with Phil [Hall] and Tony [Foresta], and I’ve known Scotty [Heath] at Tankcrimes for quite a while, plus we were going back in the studio anyway, so it worked out nicely in that respect. We always want to do more splits and shit like that, but we’re finally just getting to the point of having the studio access and stuff to making it financially viable. It was a cool release to keep some momentum going for our tour schedule and everything else, as well as a nice way to cut loose and do some fun stuff that we didn’t do on the album.

AC: The split features a cover of Negative Approach classic “Ready to Fight.” How much does hardcore play into Exhumed’s sound? Are you aware that Josh Brannon has the greatest Twitter account ever?

MH: I'm not on Twitter, so no. But if I decide to start Tweeting, I’ll definitely follow him. To me, hardcore and punk were omnipresent when I was a kid. The only “metal” people at my school were into Dokken and stuff, so I hung out with skateboarders and punk rockers. I was getting into stuff like Venom, Onslaught, Celtic Frost, S.O.D., and shit like that on my own and then getting exposed to D.I., Exploited, Dead Kennedys, Angry Samoans, and shit like that, so it’s always gone hand in hand as far as I’m concerned.

AC: To what do you attribute your longevity as a band? Exact measurements, please.

MH: I dunno man. I think it’s just knowing that in the grand scheme of things, being in a smelly van with your friends is probably gonna be way more fun than any office job, despite how much worse the pay is. We all enjoy playing and writing and traveling, and this allows us to do all those things. I’m always curious where the next thing will be – the next tour, the next town, the next riff – so that always keeps me interested. And I love this kind of music. I mean I listen to all sorts of shit, and I get sick of it sometimes, but at the end of the day, I really do enjoy it.

AC: Do you keep any contact with Bassnectar, who had a brief stint with you on bass in the Nineties?

MH: Haven’t spoken to him in years, although he was always a super nice guy. I met him when he was working at Whole Foods in the mid Nineties. He bagged my groceries and we started talking about Incantation or whatever band shirt I was wearing at the time, haha! I only recently heard his music. Pandora recommended it to me ’cos I really like M83. It was okay, a little too dance-y or something for my taste, but definitely had some cool trippy vibes going on at times.