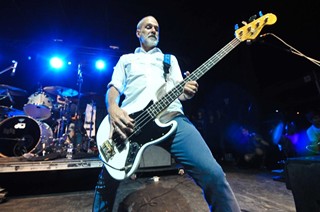 The Descendents blasted into music 35 years ago with a surf-pop-punk sound and highly caffeinated performances. Lyrics about love, rejection, and the universal fear of growing up matched with music that’s fast, fun, and best played too loud. They live by the philosophy of ALL, the quest to pursue a passion to completion and never settle for less.

From their first release, 1981’s Fat EP, to the most recent disc, 2004’s Cool to Be You, the SoCal outfit records and tours on its own terms and timeline. They’re the subjects of the documentary Filmage: The Story of Descendents/All, which was shown at the Alamo Drafthouse while the Descendents were in town last fall for Fun Fun Fun Fest.

His fellow band backbone, singer Milo Aukerman, still holds a doctorate in biochemistry and works as a researcher at DuPont. Stevenson owns and operates a recording studio out of Fort Collins, Colorado. He, bassist Karl Alvarez, and guitarist Stephen Egerton also populate ALL, while the drummer kept the beat for Flag at FFF. Prior to their appearance at the fall classic, Aukerman, Stevenson, and Alvarez answered questions.

Austin Chronicle: You’ve often been described as an elder statesmen of punk. Do you agree?

Milo Aukerman: I agree with the “elder” part.

Bill Stevenson: There are a lot of elder elder statesmen. I mean, we’re playing with The Last later on, and they’re a lot older than us.

AC: What’s the most memorable show you’ve ever played?

MA: We’ve being doing this a long time, but the best show in recent memory is this show three years ago [when Devo was unable to play Fun Fun Fun Fest in 2010 and the Descendents filled in]. We hadn’t played in forever, but we came in, subbed for Devo, and covered “Uncontrollable Urge.” It was freaking awesome!

BS: I don’t remember whose idea that was, but it had to happen. We learned [“Uncontrollable Urge”] a few days before the show.

MA: That was a really exhilarating experience. Before the show we were all sweating bullets, but after we got off, it was this moment of relief that, “Wow, we can still do this and it’s still fun, so let’s keep doing it.” That was our first show in a decade.

AC: What would be your dream line-up to play with?

BS: For us, it would be to just be on some of those bills that we used to go see as kids. It would be the Weirdos, X, the Germs, the Bags, and The Plugz – all for $5. If you could just add us at the bottom, that would be a dream show for me.

MA: Especially because if we’re at the bottom, we get to watch them all after us.

BS: And those were the dream shows. When we were kids, we were just sponging it all in.

MA: And at the time, everything’s happening and you’re taking it all in, but you don’t have the perspective to know that something amazing’s going on.

AC: Why do you think Descendents have such longevity? At your festival signing there were grandmothers with their grandkids and they were equally excited about your music.

BS: I think it’s a combination of being in the right place at the right time. As far as being part of that late-Seventies first wave of punk rock, I think we got into it for the right reasons. We’re music lovers. We weren’t trying to get laid or rich or whatever. We got into it for the sake of the music, and that motive has carried us all this far. I think people respect that those are our motives and they can get behind that – embrace our songs and our lyrics because they believe us. They know we’re not full of shit.

AC: Is it weird to be famous?

MA: Every once in a while, I meet someone and they know me from my music, and they want to talk to me about that.

BS: The young people have a term for that, Milo.

MA: It’s a good level. I don’t want [fame] anyways. It’s nice to run into a stranger and it kind of makes you feel like you have an impact. I don’t think any of us want to be really famous.

KA: There’s something to be said for being an average schlub and being able to do whatever you want. All of the fortune, half the fame!

BS: I like where I sit with it, in that there’s a low ratio of people out there in that festival that know what I look like. So I’m all good.

AC: Have you ever been out in public and heard someone jamming your music?

KA: There’s something a bit weird. I was in a friend’s car and one of our songs came on the radio. That used to be the last line you couldn’t penetrate – commercial radio.

MA: The weirdest one for me was I was at a bar in Wisconsin, and there’s this band playing, and they covered one of my songs. It just came out of the blue, even weirder than the radio because it’s just this other band. And they didn’t know I was there, so I didn’t go up and talk to them after that.

KA: Did they get the words right?

MA: I couldn’t tell. It was a typical bar band, so the sound wasn’t great. But it was pretty funny.

AC: Do you still live by the philosophy of ALL?

BS: We’re going to see exactly how much “all” we can go for in a little bit here. We’ve got the cold pressed, the regular coffee, the espressos, and then the five-hour energy. And some stuff that has yerba matte in it – those little yellow bottles. I’m going to get all that going, I think, and we’ll see what happens. I think we’ll at least get above “some.”

KA: It won’t be as bad as the volcano burger.

BS: You mean the firecracker burger?

KA: Yeah. It was this burger with ghost peppers in it. I didn’t think you two were going to make it.

BS: It all evacuated right before the show. Me and Milo went and ate these ghost pepper things, and we had to set up trashcans onstage for us to throw up in or do whatever we had to do. You take a hard beating in your quest for “all.”

AC: Are there any songs you won’t play anymore?

BS: It’s easy for us just to focus on the ones that we do like to play. I think usually we play for between 50 minutes and an hour and 10 minutes. There’s a pretty obvious 30 songs that, if we don’t play 25 of those 30, people are going to kill us. It’s really very obvious: “These are all our best ones, so let’s play these.” It’s not like, “Oh, I fucking hate all those!” It’s that these seem to be our favorites, so we play them.

MA: I think there are a lot of songs that we don’t play because we can’t squeeze them in. Some of our best songs we just can’t, for whatever reason, work them into the set. But that has no bearing on whether or not we like them or the quality of the song. We often talk about, “Oh, we should put this one back in the set.”

BS: But then which one can leave? That’s the whole thing. I have to say, we have six and a half albums, so we have enough really kickass songs to be able to play for an hour and not have there be any weakness. So that’s great. A lot of bands I go see, I only like two or three songs that they play.

AC: How do you decide which shows to take?

MA: We’ve all got our independent lives, so a lot of it is that it has to congeal around when we’re all available. The biggest restriction on that is that I’ve got a 9-5 gig, so we try to do shows on weekends, if possible – try to string together three or four dates and then meet each other after a month. This year we might have played 12 or 13 shows.

AC: Milo, a lot of people seem to think you’re a college professor.

MA: Yeah, I hear that a lot. No, I work for DuPont doing corporate research, although at this point I would probably prefer to do academic research.

BS: We kind of started recording stuff. We’re finishing songs, but because we don’t live together and we have other stuff that we do, it might take us a long time to finish it. But we’re working on it! We all have our own setups to record. Karl and I still live in the same town, so we have the blasting room there. Milo’s got a ProTools setup and Stephen’s got a studio. We’ll eventually finish a record, but there’s no telling how long it’s going to take. Sound on Sound Review: Descendents
Milo Aukerman and the punks for president! 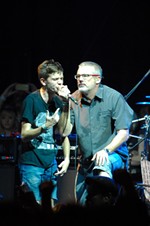