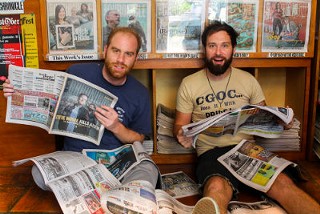 Play Misty for Me: Your ‘Chronolog’ hosts Chase Hoffberger and Kevin Curtin (right). (by Molly Ryan)

Weeks of negotiation between top-secret government officials standing guard over the Digital Millennium Copyright Act and Austin’s own South by Southwest has allowed “Playback” provocateur Kevin Curtin and me to archive our SXSWfm show Chronolog. Episodes land here every Friday.

This week, Chronolog surveyed the local hip-hop landscape in preparation of Thursday’s Good Life show at the North Door before dipping into news regarding Timmy Hefner’s decision to downscale – and potentially shut down – Chaos in Tejas. We also spun the Boxing Lesson’s “Health Is the New Drug” to commemorate the release of that band’s stupidly extravagant new music video, and dove into a few other relevant tunes.

Full playlist below. The episode will air for two weeks.