Weekly series looks to expand in Austin and beyond

What began as an open mic cypher by some of Austin’s most impressionable MCs has quietly crafted itself into one of the most well-structured hip-hop training grounds in town. The Austin Mic Exchange, a 25-act expo at Spider House every Tuesday, now looks to expand not only throughout Austin, but into other Texas cities as well.

Statewide, more of the same is sought. AMX co-producer Adam Protextor says the weekly gathering – which offers a DJ, sound man, and five minutes of stage time to the first 25 people who sign up each Tuesday – is in talks to open additional iterations in San Antonio and Houston, with the former’s progress further along than the latter.

“We want to treat it like a franchise,” explains Protextor, a member of Space Camp Death Squad who raps under the name P-Tek. “Keep the rules and regulations the same, but open in other cities.”

He adds that he and AMX cofounder Leah Manners, who also runs development at KOOP, have begun to find ways to get recurring AMX rappers on more legitimate shows. On Sunday, the two threw a Block Party to celebrate Martin Luther King Day that found former AMX Freestyle Battle winner Feral the Earthworm opening for the League of Extraordinary G’z.

“It’s a tier system,” says Protextor. “Open Mic proper is for everybody. With the Good Life events, I take a few artists from AMX I really like, or people who are showing talent. This Block Party we did Sunday is tier three: The performers are pretty exclusive, but we still use the brand to make it a community party.”

Meanwhile, the crew’s Tuesdays keep building on AMX’s nearly two-year existence. Protextor reports that the signup sheet fills up every week, with regulars like Scuare, Phranyk P, and Celebrate the Villain starting to attract attention around town.

“It’s actually really cool,” he admits. “A lot of kids start out at AMX. People who had their first time on stage at AMX are now playing out at other shows around town and making friends with people who have their foot more in the door.” 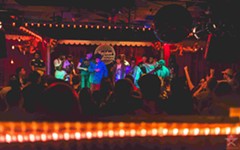 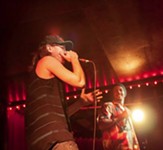