Mike Love invokes so many conflicted feelings it’s easy to forget he co-wrote “Fun, Fun, Fun” and “Good Vibrations,” sang harmony on “Don’t Worry Baby,” took the second verse on “Sloop John B,” and made John Stamos an honorary Beach Boy on Full House. Impressive CV, one nevertheless marred by controversy, and at the Moody Theater on Sunday.

The latest, of course, involves the unceremonious exit issued to Brian Wilson and Al Jardine following the conclusion of the Beach Boys’ 50th Anniversary reunion tour in 2012. There were varying reports of its specifics, but it’s still the sort of ugly thing Mike Love seems to always find his name associated with. The Beach Boys playing the Moody Sunday will not feature Wilson or Jardine.

The man I talked to Wednesday afternoon couldn’t have been more kind. He was open, candid, informative, and nurtured a deep sense of graciousness to his fans and his fellow bandmates. Mike Love has run the Beach Boys like a business, but he talks about his partnership with Brian Wilson as a family affair.

These words might be hard to swallow following the recent unpleasantness, but like it or not, Love, who turns 73 during SXSW this year, has dedicated every ounce of his being and life to the Beach Boys. That shouldn’t be undervalued.

Austin Chronicle: Memories of playing Austin over the years?

Mike Love: I remember once we played out by the lake, in a wood house place. That was pretty cool. But we haven’t overplayed the market. In fact, we always talk about playing in Austin because we all like Austin as a city. It’s a great town. I think people appreciate Austin, but we don’t make it out there enough.

AC: You’ve probably heard a song like “Good Vibrations” over three million times or something. Are you still able to get lost in those standards? Do they give you any joy? What’s it like playing songs you’ve written over half a century ago?

ML: Long before we were the Beach Boys, the Wilsons and the Loves used to get together every holiday, every birthday. The thing that brought us together was music. We used to love singing those harmonies. Brian and I would sing Everly Brothers songs. The Beach Boys was a family hobby that we turned into a profession. We’re very blessed. Fifty years later, we’re still performing like a family.

About a month ago in Wichita, I saw a little girl, maybe 9 years old, in the second row – next to her grandparents. This 9-year-old girl had made up an “I love the Beach Boys” shirt, and she was singing along to almost all the songs. When you see that kind of response from children, teens, young adults, adults, all the way to grandparents, it’s pretty miraculous and pretty wonderful. We’re getting to do what we’ve always loved doing, and we’ve enjoyed an incredibly long career. The only people that outdate us are Willie Nelson and Tony Bennett. I never get tired of singing those songs.

AC: At a certain point the touring aspect of the Beach Boys will cease to exist. That’s just what happens over time. When you see a 9-year-old girl in an “I love the Beach Boys” shirt, does that give you some sort of reassurance that your music will be passed down? That you don’t necessarily need to be here in order for the Beach Boys to thrive?

ML: If you look at the history of music, you have classical composers, church music, pop music, etc. Music that’s existed for centuries. I think there are some songs that are close to immortal. They will last longer than we will in this lifetime.

AC: You mentioned the Everly Brothers. I know they were very important to Brian, and you, and the Beach Boys as a whole. What was your reaction when you heard about Phil Everly’s passing?

ML: Well I was saddened, obviously. It’s not fun when you hear about one of your idol’s deaths. We had the chance to tour with them. They were on one of our TV specials, so we got to meet them, and sing with them, and that was a big thrill for us. But that’s life, you know? Those Everly Brothers songs are very dear to us to this day. We used to sing them in high school.

AC: You had some issues with how the last album [2012’s That’s Why God Made the Radio] was done. You’ve said that it felt rushed, but did it still feel good being in the studio again with Brian?

ML: I certainly hope we get to record another album the way it should be. I was told we were going to be able to sit in the studio and write songs with Brian, but that was unfortunately not able to happen. However, it was great being in the studio together and listening to playback of songs like “That’s Why God Made the Radio.” The songs that are on that album reminded us of 1965 all over again.

AC: Do you still meditate every day?

ML: I definitely still practice. Meditation was a turning point for me. It helped me deal with a lot of stress and has given me a lot of relaxation. Ever since 1967 I’ve done it every day. It was pretty spectacular being in India and listening to Maharishi.

AC: Smile has such a mythology about it. Do you buy into that same mythology or do you think the mystery and legend around the album has helped elevate it in the pop music canon?

ML: I have mixed feelings about it. I think there was some great music on Smile, some incredible tracks. But at that point in time, there were so many drugs being taken by Brian and other members of the group, and there was a lot of collaborating with people other than myself. I had literally nothing to do on anything on the Smile album, so naturally I was a little upset.

I collaborated with Brian on so many hits, but I wasn’t under the influence of anything during the writing of that stuff. There was such weirdness going on at the time. I’m not trying to poo-poo it, but it was just a little too weird for my taste. Then Brian shelved the album, and whenever you have an unfinished symphony it takes on mythological proportions.

I do think there’s some beautiful tracks, like “Wonderful” and “Heroes and Villains,” but there’s a negative side to it too.

AC: You’ve said that you’re working on a book.

ML: I’ve had some discussions with some people, but there’s nothing on paper just yet. It’ll be about my time and my story with the Beach Boys up ’til now.

AC: You’ve been embroiled in some controversies over the course of your career with the Beach Boys and it’s caused some people to view you as a villain. Does that perspective bother you?

ML: It probably doesn’t bother me enough, but I’m aware that some of my humor can be misinterpreted. But there’s also been some absolute mistruths that have been spread. I’ve been quoted about things I’ve never even said, like that I didn’t like Pet Sounds and I said, “Don’t ask me the formula?” I never said that! I never ever said that.

As a matter of fact, I named Pet Sounds. It was a double entendre. I played the album for the label. I know what I said and I know what I didn’t say. Maybe I’ve been brash or said things that people have interpreted as harsh, but I never did it with malicious intent.

AC: Do you think about your legacy at all?

ML: I think the Beach Boys’ legacy is “Fun, Fun, Fun,” you know? We’re calling our next tour “50 Years of Fun, Fun, Fun.” By and large, the Beach Boys’ legacy is about incredibly positivity. We’ve traveled around the world and uplifted the spirits of hundreds of millions of people. Our sound is one of the most recognizable in all of music. We’ve had Vietnam vets tell us that our music helped save their life.

We aren’t the only ones, but the Beach Boys have been regarded by so many people. To me that’s the real legacy. The legacy isn’t someone disagreeing with somebody else. That’s always going to happen in business and family, but the results of what we did do is amazing. 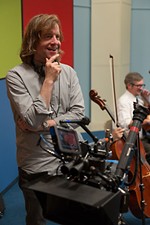 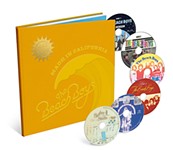 The Beach Boys
Made in California (Record Review)