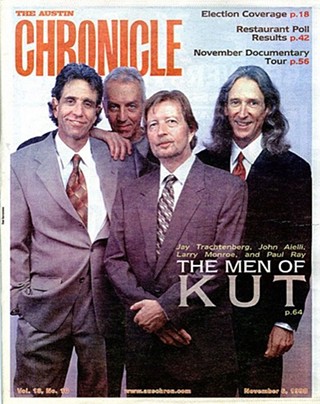 Local radio legend Larry Monroe died this morning. A sufferer of chronic obstructive pulmonary disease (COPD), according to KDRP founder Daryl O’Neal, he was taken to a hospital late last night after experiencing breathing problems. O’Neal says he spoke to him earlier in the evening about his Blue Monday show.

“You can’t replace Larry Monroe,” adds O’Neal. “Larry wasn’t done with his life. He was vibrant.”

His signature program, Blue Monday, will go on in tribute next week, confirmed O’Neal, adding that the KDRP studios will be renamed the Larry Monroe Studios. The veteran Austin deejay went to work for the Dripping Springs frequency in 2011 after spending 29 years at KUT. Monroe was 71.

“We asked if he’d do a show with us and he said, ‘Yes. As long as you don’t tell me what songs to play,’” recalled O’Neal, who says Monroe required three CD players to do his show. “That first Monday they saw him walking up the stairs with a box of CDs and he just made magic.”

Once one of the pillars of KUT – chronicled in a 1998 cover package – a decade later, summer 2009, his considerable fanbase protested long and loud when the station cut back his role. Punch his name into our site’s search engine and an avalanche of Postmarks spell out the local controversy. He hosted his last Blue Monday at KUT in August 2010, but as recently as June, the whole affair remained fresh for current KUTX talent Laurie Gallardo.

The show found new life on KDRP, as did Monroe’s other on-air brand, Phil Music, which aired Thursdays. O’Neal reports that people from all over tuned in on their iPhones. The station’s success followed Monroe joining the staff.

“He was the spark that made us believe in ourselves,” laments O’Neal. “He showed how great radio was done. Hopefully, he left behind that stardust and we can grasp it.