Rather, three suggestions for the SXSW Interactive Skyper 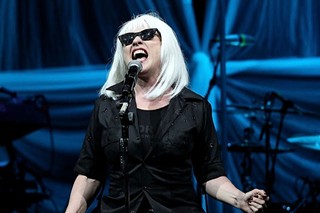 Blondie herself at the Moody Theater, 2011 (by Gary Miller)

After last week’s news that rockstar astrophysicist Neil deGrasse Tyson will deliver the keynote speech, SXSW Interactive trumped itself with Julian Assange. Given his exile, there’ll be no helicoptering in or secret tunnels. Rather, the WikiLeaks head will speak via Skype from his home in London’s Ecuadorian embassy.

For the luxury of, you know, not being arrested, Assange is missing one of the best parts of SXSW: the music. I believe that many of the big names from other parts of the three-headed conference like to slum around with music plebes, which is why my eyes will be peeled for a suited-up Neil deGrasse Tyson at every math rock show I cover.

While we’re still working on the details of Skyping performances back to Assange, here are my musical suggestions for him if he decides to brave the SXSW traffic and an international manhunt.

There are lots of Aussies on this year’s band grid, but I think Callinan and Assange share a connection beyond their motherland. At a recent show in L.A., wearing only stars and stripes boxers, Callinan asked the crowd if it was a federal crime to shit his pants. I bet Assange knows loads about the legal system and federal crimes. Plus, Callinan seems a little grittier than other countrymen like Angus & Julia Stone.

What does a Puerto Rican rock band and political Brooklyn punks Outernational have to do with each other? They’re both two hops away on seven degrees of Julian Assange. Assange, who collaborated with musicians Calle 13 and Rage Against the Machine’s Tom Morello for December track “Multi_Viral,” might enjoy the lung proteges of Calle (Fof y Los Fitches) and Morello (Outernational), who’ve previously collaborated.

As Blondie rolls its 40th anniversary, we have to imagine Assange would stop in and give his respects to the New Wave OGs. Because if there’s anyone more platinum than Debbie Harry, it’s Julian Assange.