Reelin' in the New Years

Where you gonna be when the clock strikes 12? 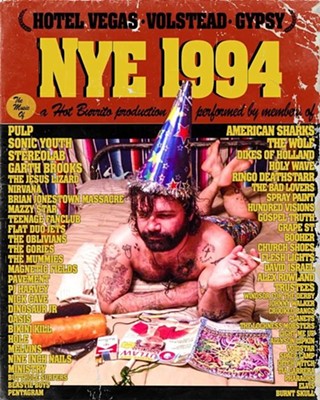 Say sayonara to 2013 at one of Austin’s magnificent New Years Eve music events. There are literally dozens to chose from, so I took the liberty of handicapping your evening.

A rough looking crew invades the North Door as red-hot gothic ruralist Scott H. Biram previews his highly anticipated Nothin’ But Blood alongside blues metalheads Honky, whose frontmen spent much of 2013 with the Melvins and Down, and the gothic southern doom boogie of Chili Cold Blood. Whiskey shots mandatory.

Indie rock crew Whitman call it quits after eight years, and they’re going out in style with a hotel party. Their regrets, according to singer Ram Vela, are few: never touring through Delaware, never being selected as the musical guest on Saturday Night Live, and never receiving their plaque after winning Best Rock Band at the 2013 Austin Music Awards.

The band’s list of accomplishments runs longer: seven national tours, a spot opening for Olivia Tremor Control just days before Bill Doss died, and the release of one great album in 2012’s Weekends. Also sweet that their last show is at a hotel in North Austin on New Years Eve. Why the fuck not?

Willie Nelson and Friends at ACL Live at the Moody Theater

The red headed stranger rolls the hits every year at the Moody, and the vibe is always unbeatable. It’s like being in a room with the Dalai Lama, except Gyatso’s stoned and noodling on an old guitar. Expect an appearance from both Father Time and Baby New Year, the latter of which broke free from 2012 in the form of a tiny black guy in a diaper.

Joe Ely at the Roost

One of the great Texas troubadours helps uncork North Austin’s newest venue, the Roost, a deluxe 700-person capacity club decorated with a lot of Austin musical history, including several vintage Joe Ely concert posters. Clearly the venue was made for him.

Seventh Street hotspot Holy Mountain keeps it local with a family affair featuring deft record scratcher and producer Kid Slyce, the fresh indie-folk of Mighty Mountain, and funnyman Phranchyze, plus a very special guest you’ll have to climb the Mountain to see.