Here’s something most people don’t know about veteran behind-the-scenester Nancy Coplin: “I came to Austin in 1966 to go to UT and left to marry a man in the ‘music business.’” By 1983, she’d moved back, and neither Austin, the Music Commission, nor the Airport have been the same.

After tonight at Antone’s, when the unflappable redhead celebrates her retirement from booking the Austin-Bergstrom International Airport music program by hosting the club’s Blue Monday happy hour – with special guests Marcia Ball, Carolyn Wonderland, Emily Gimble, and more – things will shift for Coplin once more.

“I was hired as a contractor to book and coordinate the music for the Airport’s grand opening in 1999. I’d already been booking the iconic Armadillo Christmas Bazaar and What’s the Cover on the Austin Music Network, where we had daily live music. When the full-time position opened up, I was hired to run the music program, which has grown from two shows a week to 23 shows a week in six venues, all in the airport.”

That was quite a switch for Coplin, who moved back to Austin from New Orleans in the early Eighties to be closer to her family in Dallas. Once here, she found herself on the Austin Music Commission.

“I didn’t move here with the intent of being part of the music scene,” she admits. “When I arrived, I only knew one person in Austin. As I started to participate in the mainstream community, I got involved in the music community and helped merge the two.

“When I first arrived in Austin in the Sixties, music was a part of the culture here. By 1983, then, the music scene was thriving and the core community that went out to hear music were immersed in it. It seemed more about the music and being part of the community than it is today, although that same core group, a little older, appear to be the ones that still go out to support music.

“I will continue to book the Armadillo Christmas Bazaar and HAAM Benefit Day. There’s my community work with nonprofits as well, like WIMPS, HAAM, AMF, HOME, Guitars for Swaziland, Swan Songs. And helping the music community with benefits for those in need.

“I also have some new local clients in the works, however. I really want to take my skills and unique business models to other airports worldwide.

Coplin describes the process she developed in making airport music work as “trial and error,” adding that she’s proudest of showcasing the local music scene to worldwide travelers. Noting that ABIA hired a capable and competent replacement, Coplin freely offers herself as a consultant on future programs and events.

“I am even certified with the City of Austin as a woman-owned business,” she attests. “And grass has never grown under my feet!”

Latest venture Public Space Music, her consulting firm, is proof of Coplin’s dedication to what turned out to be her life’s work.

“I plan to help spread music everywhere to everyone, forever.” 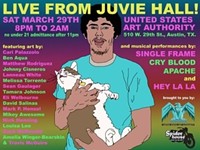 Random Play
Going-ons in the ATX