The Reverberation Appreciation Society opened its stash box just now to reveal 43 acts playing Austin Psych Fest 7 at Carson Creek Ranch May 2-4. A quick scan of the names, including Primal Scream, the Zombies, and Loop, is all it takes for the psychedelics to start taking hold.

There’s many a vein to mine in the initial names, like the Japanese contingent of Mono, Acid Mothers Temple, and Tokyo acid-folk band Kikagaku Moyo. A couple notables – Avey Tare of Animal Collective and Black Moth Super Rainbow’s frontman – arrive in the other guises, in this case Slasher Flicks and as Tobacco, respectively. France puts in a strong showing with three imports, La Femme, Aqua Nebula Oscillator, and Zombie Zombie.

In fact, from the Netherlands (Jacco) and Berlin (Kadavar) to Africa (Terakaft), Brazil (Boogarins), and Australia (King Gizzard & the Wizard Lizzard), APF7 has gone global in its talent scouting. UK (Toy, Horrors) to Latin America (Mexico’s Lorelle Meets the Obsolete, Puerto Rico’s Fantasmes), visas are being dealt with.

On a domestic level, Portland, Ore., Kiwis Unknown Mortal Orchestra broke out in 2013, San Diego instrumental psychs Earthless released another mind-boggling studio LP this year that everyone slept on, and of course Athens, Ga., pop carnival Of Montreal. Don’t forget locals ranging from elder mystics (The Golden Dawn) to contemporary guitar baths (the Young), and finally Psych Fest organizers/sorcerers the Black Angels, who anchor the whole shebang after putting on one of their best hometown performances at this year’s showing.

Plus, for the first time in its history, the festival returns to a previous year’s site, once again occupying Carson Creek Ranch. The 58-acre retreat, located five miles east of town by the Airport, rests on the shores of a sleepy section of the Colorado River and features a natural amphitheater stage overlooking the water. The on-site camping’s pretty sweet as well.

Several acts playing APF7 can’t be divulged because they’re also playing Coachella, which gets to announce them first. Expect a second wave of Psych Fest acts after Coachella drops its lineup in early 2014.

Tickets are available now at www.austinpsychfest.com. 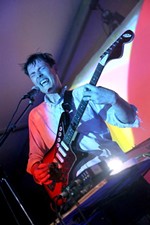 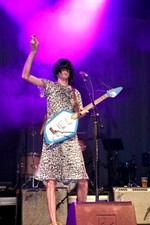