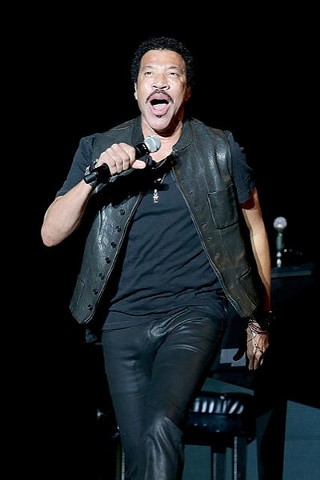 Dancing on the ceiling: Lionel Richie at the ACL Music Fest 2013 (by Gary Miller)

Locally soulful singer-songwriter Walter Tragert says, “When folks ask me the age-old question – ‘Beatles or Stones?’– my response is always ‘Marvin Gaye.’” Friday at the Cactus Cafe, Charlie Faye hosts Motown vs. Stax, wherein Austin’s finest sing songs Bonnie Whitmore describes as “yet to be topped by anyone.”

“I love putting on a big tribute show like this,” enthuses Faye. “It gives us a chance to get the whole music community together to sing songs we love! The band will play classic instrumentals like ‘Green Onions’ and ‘Time Is Tight.’

“So many of us have deep, longstanding connections to these songs.”

I talked to a few of the musicians playing Friday. They have profound memories of listening to Motown and Stax songs growing up.

Candace Bellamy: “My mom loved the music of Motown and Stax. It’s the kind of music that gets in your soul with its incredible rhythms, instrumentation, stellar vocals, and lyrics. There’s nothing sweeter than Memphis Horns on a Stax album or the tight harmonies of a Motown group.”

Raina Rose: “I had a boom box growing up and I would walk around the house listening to Portland radio station KISN, all oldies, all the time. I would sing into a hairbrush to the likes of the Supremes and Otis Redding and Smokey Robinson. They were my first musical loves and some of the best pop songs ever written.”

Jeff Plankenhorn: “One of my fondest memories as a child was laying on the floor in front of our family stereo listening to Stevie Wonder, and I still listen to him every day.”

“Hitsville U.S.A” stands at 2648 W. Grand Blvd. in Detroit, Michigan, where Motown began. Founded in 1959 by Barry Gordy, Jr., the label’s original headquarters still sits there, a major tourist attraction in a bankrupt city. Gordy started the label on a family loan, took “city” out of “Motor City” and founded “Mo Town.”

“I think Motown and Stax ultimately made American pop music legit,” asserts Colin Gilmore. “They both had the magical ability to turn misery and hardship into catchy, feel-good hooks with real depth. They had a huge effect on my musical upbringing.”

Breaking down the color lines of music was one of Motown’s most important accomplishments, and likewise Stax. Motown chief engineer Mike McClain built a playback system that sounded like a car radio to test the Motown sound before singles were released. Gordy sold Motown to MCA in 1988. It’s now in the hands of Universal Music Group.

Mike Meadows, Friday’s house band drummer: “My parents played Motown and Stax on rotation. I learned how deceptively intricate and complex those classic songs really are. The changes, the melodies, the grooves, and textures just blend so seamlessly into catchy, three-minute pop songs that most people don’t even notice the beautiful subtleties.”

The Motown sound used a lot tambourines, plus call and response, to help make those distinct melodies pop. Some of Motown’s biggest stars included Smokey Robinson, the Jackson 5, Supremes, and the Commodores, whose Lionel Richie just played the Austin City Limits Music Festival.

Me, I’ve rearranged a hit by Stax star William Bell, which I’m singing as a duet with Payton Nicole.

“Motown had a huge impact on my music taste and music style,” she affirms. “Seeing ladies such as Etta James and Diana Ross exhibit such soul and power onstage each and every time they got up there was a huge inspiration to me as a young girl. I can confidently say they’re the reason I keep singing.”

Stax, aka “Soulsville, USA,” was founded in Memphis in 1961. While the label produced legendary black artists, those who founded it – Jim Stewart and his sister Estelle – were white. Otis Redding remains the biggest star on the label, which was eventually absorbed into Atlantic Records, and now exists as a division of Concord Records.

Noëlle Hampton, also part of Friday’s house band: “Stax and Motown put out timeless music. Young and upcoming singers are still covering these songs some 50 years later. They were perfectly crafted tunes, musically sophisticated, yet simple and recognizable to the ear. The artists were the highest caliber performers and singers that will never be topped. It’s a constant inspiration for us to write better songs.”