A G-rated ‘Last Patrol’ from the Silver Age 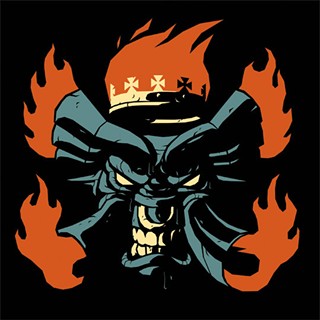 Monster Magnet hasn’t toured the U.S. in over a decade, its last local appearance beyond even that. In the wake of galvanizing new LP Last Patrol, New Jersey’s cosmic rockers crash down on Monday, Dec. 2, at Red 7. Founder-leader-overlord Dave Wyndorf raved about the new disc while revealing a chief lifetime inspiration: comic books.

Austin Chronicle: How long has it been since you last played in Austin?

DW: I know – it’s amazing. And Austin’s one of the best places to play in the States. If there was an Austin every 500 miles, I would’ve played the States a lot, you know? The problem with the States is getting from one good place to the other without losing your shirt.

AC: Maybe I’m casting aspersions here, but it sounds refreshed. Not that the last few albums weren’t good, but this one really sounds like a step up.

DW: Yeah, I tried to make it a step up. How I stepped it up was just to pay closer attention to every single detail. The last couple of records, I produced ‘em very quickly, in a kind of rush to just stay on the road. Which is what you do now – that’s how you make your money in music, and that’s how you survive as a musician. And I hired producers that took liberties with editing here and there.

It’s just a way to get records done without the tender loving care that I used to put into them. And I’m totally guilty. I did not put that in there.

With this one, I put a lot of myself into it. Into very, very small, little details – just making sure the parts are better, more original, sounding better. And I kind of left that to only a certain number of songs on each record. And I noticed it in listening back: “This just doesn’t sound like I feel. It doesn’t sound like me.”

So I just took the bull by the horns. I was just like, “Look, I don’t care how long this thing takes to make. I don’t care how many administrational mistakes I’ll make by producing the album myself. I’m gonna have to do it.” I’m just gonna go in there like a craftsman, a guy who makes each individual chair line up in a row, rather than designing it and having it mass-produced.

And I listen back to it and can hear it. You can actually hear the small attention to detail. So that’s where it came from. I just didn’t like the way things were going.

AC: It paid off not just in the details, but in the songs, which are really, really well done.

DW: Some of that is due to the fact that, when you personally craft something – get into it that much – it ups the game for everything. I didn’t allow any gratuitous fist-in-the-air rockers to go through – stuff that had a good beat and, “Oh, well, this is a traditional rock song and this will go on the record because it sounds cool and it’s got pretty cool lyrics.” It wasn’t enough. It had to be swirlier, and I think that comes from the approach of how to make it, too. You write a couple of songs and produce them with that attention to detail, and it demands that everything else around it be equally crafted.

AC: I picked up Dopes to Infinity because there was a song called “Ego the Living Planet.”

DW: Awesome! My job is done. Somebody actually recognized it.

AC: And Last Patrol has “Mindless Ones” on it. So, I’m assuming because of that and the mention of Jack Kirby in the song “Melt,” you’re an old school Marvel guy.

DW: Totally. I mean, I’m a comics guy through and through. But the stuff that hit me at the earliest age was the old school Marvel stuff. I actually got in on the end of the Silver Age. I was 10 years old or whatever and buying 12-cent comics off the stands. So that stuff is in my heart and brain forever. Incredibly creative, real-time drama in those books. I can’t say enough about it – the artists, the spirit of the whole thing. The zeitgeist of the late Sixties for comic books and other things was absolutely incredible, and never matched, in my opinion.

AC: I’ve read comics off and on most of my life, but I haven’t been doing it much the last few years because they just don’t seem to be much fun anymore.

DW: They’re heavy and they’re making a point to make it for adults. A lot of times these guys forget one of the reasons comics worked in the past is that they were G-rated in the truest sense of the word – meaning they were produced for a general audience, not the modern style of, “Oh, we’re gonna make this for kids.” They worked on their subtext. They really worked on making this stuff breezy, a little bit humorous, but leaving enough to the reader’s imagination of where this stuff could go or what it could mean.

A lot of the stuff now, while it’s technically better – super-sophisticated writing, really tight, almost cinematic-style storytelling – you hit the wall right away. And if you’re anyone who remembers comics when they were a little bit more oddball, you walk away from ‘em, because you’re like, “This isn’t what I wanted. I wanted something that would allow me to think. This thing is forcing me to watch this damn TV show that they wrote.”

I remember comics as being something that was a little bit more mind-altering, y’know? And not because they wrote them that way, but they allowed the space for you to think that way. Again, a lot of stuff went down that way in the Sixties because of the G-rating. It forced writers to somehow imply that there were other things going on.

AC: Any favorites you read now?

DW: There are some crazy comic books out now that are really, really good. There’s one called Prophet, from Image, which is an outer space story. This guy wakes up after 100 years and has to lead some sort of insurrection somewhere. It doesn’t even matter what it’s about. It’s told in a style that’s graphically quite like Moebius, really super inventive, very comic book-y in its way. Again, it leaves a lot of room for interpretation on the reader’s part.

And also all that B.P.R.D. stuff from Dark Horse. It’s about paranormal investigators in the Hellboy universe. That’s really good. It doesn’t betray Silver Age aesthetics, but it’s not by any stretch of the imagination dumb. They kinda get it, as far as the reader goes. Not overly heavy, pleasing to the eye, and moves fast. I love comic books that move fast.

AC: Publishers seem to stretch out every storyline now in order to ensure you can get a trade paperback out of it.

DW: The primary mission was to sell each issue as an issue. They’ve gone from that now. Now, buying six issues of a comic book is almost like paying for 15 minutes of a movie every month. Can you imagine? “Well, what are you gonna watch?” “I’m gonna watch that new whatever movie, but I’m gonna watch it 15 minutes at a time once a month until the movie’s done.” I don’t know what they’re thinking. No wonder comic books aren’t selling. Nobody can understand what the hell’s going on.

AC: How do you feel about the movies that have come out in the past few years?

DW: I’m not a big fan of the movies. They’re cool and everything, but they don’t remind me of comic books at all. They’re Hollywood movies for a movie crowd. Some of ‘em seem to be more on it. I liked The Watchmen. It was very, very faithful, and I don’t know if it runs well as a popular modern Hollywood movie, but that’s not a bad thing to me. I’m over the popular Hollywood movie model –  the prompting, the one-liners, the special effects. It doesn’t seem like comic book characters to me at all. It just seems like movie stars in funny suits running around.

The first Spider-Man was cool. That was really faithful to the origin. That kinda gave me a heart flutter.

AC: The one I liked best from the past few years was The Incredible Hulk, with Ed Norton.

DW: That was cool! That was like a comic book. It had a weird vibe to it.

AC: The Hulk was my favorite comic book as a kid, and that reminded me of those comics. Naturally, it was one of the least successful films.

DW: I agree: “Wow, this is like a Hulk comic book. I can get behind this.” Bomb at the box office. If there was some way for these guys to make these things without spending so much money, people would take more chances. But because of the amount of money it takes to make them, they’re going for the broadest acceptance possible.

I love the idea in X-Men: First Class where they did a retro thing. They made it in the Sixties. That could allow filmmakers to take some of these Marvel characters and build around them a certain time that wasn’t today. They wouldn’t have to obey current fads and date it. Make another Hulk movie, but make it in New Mexico in 1962, with the Cold War. I think they could get some great stories out of there and not have to be quite so Hollywood modern.

AC: In the early Eighties, there was a Spider-Man annual [Amazing Spider-Man Annual #14, October 1980]. Your old band Shrapnel made a cameo appearance.

DW: Drawn by Frank Miller! Unbelievable! That’s still one of the shining moments of my geeky life. We were in the band Shrapnel, played New York all the time, and we had met some people who knew famous comic book writer Denny O’Neil. And he was working with this young guy, not super new, but rather new: Frank Miller. They came to CBGBs to see us and the next thing you know, Denny had talked with Frank. “Why don’t we put these guys in the comic book?” Just to be cool, y’know?

It was amazing. It wasn’t an Easter egg, either. This was a serious plot point. It was fantastic. I totally cherish that thing – it’s a whole point of pride with me. And all because these guys were just nice guys. They just decided to be cool about it. It’s the kind of thing that would never happen today. So many people would be talking about licensing and lawyers. Back then it was just like, “Yeah, sure.”