Doug Sahm: All About the Groove After Lou Reed’s death, the number of people sharing stories of his friendship or recalling a random meeting with him was astounding. The only time I remember something similar happening was after the passing of Doug Sahm.

One night in the early Nineties, after a Texas Tornados show at the Lone Star Roadhouse in New York, I was sitting at the bar wearing a Baltimore Orioles cap. Sahm walked by, spotted my hat, and we ended up talking baseball for nearly an hour. I discovered after his death that he did this sort of thing regularly. Amazingly, so did Lou Reed.

Next Monday, 14 years to the day after Sahm’s sudden death at the age of 58 on November 18, 1999, he’ll be the topic of a panel discussion at the Cactus Cafe. Moderated by Jody Denberg of KUTX, All About the Groove features Sahm peers/bandmates Marcia Ball, Speedy Sparks, and Ernie Durawa, as well as the best friend Texas music has these days, author Joe Nick Patoski.

On top of that, Patoski will be screening what he’s calling a sizzler reel, a trailer for a proposed documentary on Sahm he’ll direct, with the hope of attracting some investors in the project. The way he sees it, without the late Tornado the tale of the Austin music scene might be completely different.

Taking nothing away from the legend of Willie Nelson nor the Armadillo World Headquarters, he recalls that when famed record producer Jerry Wexler came to town to sign musicians to his proposed country label Atlantic Nashville, his first two signings were Sahm and Nelson. Neither had a huge national impact with the label, but locally, Sahm’s ability to excel at all the different genres of music native to Texas – swing, country, blues, rock – plus the fact that he was a bona fide rock star after the Sir Douglas Quintet, gave him a wider range of influence.

“I really think he’s the one musician who sounds like Texas,” Patoski says. “He can play every indigenous style, not only competently but authentically. Blues, hillbilly, conjunto – the black, brown, and white elements of Texas. He knew them all and could not only play them all, he promoted them. It goes beyond being a musician.

“I think he’s probably the most under-appreciated musical cat in the history of Texas music.”

Besides attempting to keep the flame of Sahm’s memory alive, the panel delves into the explosion of the Austin music scene in the Seventies. I’ve heard Ball talk about her days with Freda & the Firedogs, a long-haired country rock outfit that frequented the Soap Creek Saloon, which happened to be just down the road from where Sahm lived. Ball claims that Sahm eventually stole her band. Drummer Durawa was a lifelong friend of Sahm’s, while Sparks was a member of both the Firedogs and the Tornados.

“Doug got bored so easily to the point that it affected his career,” Patoski says. “He could never decide or stand still. From a listener standpoint, you think he’s all over the place. But he was a great player. Most people don’t know who he is.

“So I’m hoping the panel at the Cactus will educate people who arrived after the early Seventies or whenever about how Austin got to be Austin. This is a pretty good insight into the musical end of it, and this guy was the organizer of it.” 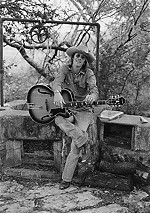