Austin’s historic home of the blues will relocate 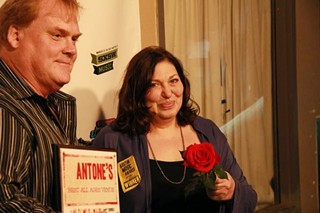 On Wednesday, almost two months after local club tycoon Frank Hendrix put the club up for sale, a team of investors announced they’d acquired Antone’s. As Gin & Pentatonic and Blues Scalable, the seven-person consortium bought the brand, which doesn’t include the lease for 2015 E. Riverside, where Antone’s has been since March, or the equipment.

The team includes one Austinite, photographer/musician Arnold Wells, and his famous brother, geneticist and explorer Dr. Spencer Wells, as well as former Dave Mathews Band keyboardist Peter Griesar, who once owned and operated a club in Charlottesville, VA.

While confirming that the group’s actively looking for a new location downtown, another partner, Tayloe Emery, declined to elaborate. Speculation that Antone’s might relocate to Emo’s old Sixth Street location remains just that, although one representative of the current lessees, Grindhouse Productions, casually acknowledged months ago that their current contract expires in March.

Emery says no decisions have been made yet and predicts that despite a widening musical scope in recent years, the new Antone’s will retain a blues focus.

“Our interest isn’t to create something new, but to take something that’s already beautiful and restore it,” he offered, adding that he expects the relocated Antone’s to be open by summer 2014, if not sooner.

For now, the venue will continue to operate on Riverside through the end of the year. Notable calendar dates until then include a sold-out Gary Clark Jr. show on Nov. 30 and a performance by Devin the Dude Dec. 7.

With time remaining on the Riverside building’s lease, Hendrix says he’s looking for a working partner to take over the club – equipment included – in 2014. By phone on Wednesday, Hendrix admitted he technically never owned Antone’s, but rather acted as its public face while his business partner Stewart Bates owned the brand and lease. The same was true when he operated Emo’s, which he sold to Austin City Limits Music Festival promoters C3 Presents earlier this year.

It’s worth noting that one prospective local buyer, a club owner who put the original asking price on Antone’s in the mid six figures for the venue, lease, and equipment, bowed out of the running early due to questions of brand licensing. Indeed, if you search Antone’s in the registry of United States Trademarks, there’s several with identical spelling and fonts registered for use with sandwiches and one for the club that’s been expired for five years. When asked if they addressed licensing issues when hammering out the current contract, Emery had no comment.

“Some of the new owners went to college at UT and loved Antone’s back when it was on Guadalupe,” she said Wednesday night. “They want to keep it alive and I love hearing their stories.”

How does she feel about her namesake club being relocated twice in one year?

Her late brother Clifford Antone opened the club at Sixth and Brazos in 1975 and with expertly selected blues bookings helped Austin earn its reputation as a live music hotbed. He later relocated the venue to Anderson Lane, Guadalupe, and the warehouse district before he became a blues angel in 2006. 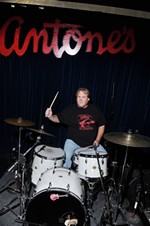